Board of Education adopts FY 2010 Budget

The Montgomery County Board of Education (BOE) finalized the Operating Budget for Fiscal Year (FY) 2010 with a vote of five to one this past Monday, after a series of conferences and public discussion sessions during which teachers' unions, community members and the board discussed economic priorities within Montgomery County Public Schools (MCPS).

One of the smallest budget increases in over twenty years due to financial crisis, the $2.13 billion budget proposal will be independent from taxpayer dollars and maintain reasonable class sizes and other important educational initiatives, according to BOE Vice President Patricia O'Neill. In the preparation of the budget, Superintendent Jerry Weast asserted the importance of over $35 million in reductions for next year. 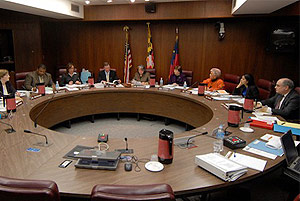 Preserving the limit on class size was a particularly significant factor in creating the financial plan for FY 2010. "The classroom is the most important piece of our budget," O'Neill said. "We believe individualized attention to the maximum extent really helps to ensure success."

While maintaining low class size was the main focus, the BOE also acknowledged other crucial academic priorities. "There have been a variety of academic reforms and initiatives that have been instrumental in improving student achievement over the past decade, including class size reduction, and every effort was made in preparing the budget to maintain these successful reform efforts," Weast said. Increasing the number of available Advanced Placement courses and paying extra attention to kindergarten and ESOL classes were among key considerations.

Weast also stressed the significance of implementing a budget independent of taxpayer dollars. "Given the magnitude of the economic crisis, we worked to prepare a budget that would not require any additional local taxpayer funds next year," he said. According to Weast, the great extent of the recession has caused complications for the whole budget adoption process.

Both O'Neill and Weast admit that the process was difficult due to the substantial financial shortfalls the BOE experienced. In the preparation of the FY 2010 budget, the board identified more than $35 million in necessary cuts for next year. "Thirty-five million dollars in reductions is painful," said O'Neill.

Weast agreed, acknowledging that the extent of this year's economic crisis presented unprecedented obstacles. "This is, by far, the most challenging budget I've had to put together in my 10 years as superintendent," he said. "It required us to make some very difficult choices."

The adoption of the budget marked just one step in the long process of finalizing fiscal plans for FY 2010. In December, Weast proposed an initial budget that was about $23.7 million less than the current fiscal initiative. The discrepancy was the result of miscalculations made by the state for the FY 2009 Budget. "The state shorted us last year," O'Neill explained. "But we are promised that we will [be compensated] for next year."

After a committee of union representatives examined Weast's original budget and made recommendations for $30 million in savings, the board renegotiated teacher contracts. Teacher unions agreed to sacrifice their cost-of-living wage increases to provide more money towards the county's large deficit. This cooperation among teacher unions played a large role in settling the final budget decision, according to Weast. "We could not have balanced the budget without the willingness of our four employee associations to work collaboratively and come back to the bargaining table to renegotiate their wage agreements," he said.

Following these union negotiations, the board conducted hearings in January during which community members expressed their opinions on the proposed budget. Input from the PTA, employee unions and school staff significantly aided the board in creating a workable budget that would correspond with the important academic priorities of the school system as a whole.

With the help of these community members, the BOE has implemented a budget that will ensure future financial security for the county. By freezing hiring and spending, the board was able to create a $20 million savings plan to be applied toward next year's budget, according to O'Neill. Weast stated that cost-effective initiatives like these, along with promised state aid, will contribute to future fiscal profit. "Any additional revenue in next year's budget will come from the savings plan we have enacted for both this year and next year, and from additional state aid that is due to the school system," he said.

Despite the board's progress toward finalizing the FY 2010 Budget, the process is far from complete. "There has been a lot of uncertainty because we don't know for sure how much money we're going to get from the state," O'Neill said.

As a result of this pending state aid and the fact that the County Executive and County Council have not yet reviewed the adopted budget, the BOE will be unable to complete the budget-making process for several months. "This is just the first step. We won't finalize the budget until June," O'Neill said.