Board of Education approves funding waiver for FY 2011

The Maryland State Board of Education approved a funding waiver on May 25, which will clear MCPS of its Maintenance of Effort (MoE) penalty. This will allow the county to fund education about $138 million lower than the Maintenance of Effort level for fiscal year (FY) 2011. The penalty, according Board of Education staff assistant Laura Steinberg, would have amounted to approximately $51.3 million.

The school system, according to Student Member of the Board Tim Hwang, is required to fund education based on the number of students currently attending school within that county. This per people expenditure is required by the state to remain the same or to increase each year, which is the basis for the Maintenance of Effort policy. 'The local government funds school systems at the same per people rate as the previous year,' said Steinberg.

Montgomery County has been able to exceed Maintenance of Effort funding each year for the past several years. In fiscal year 2010, however, MCPS was unable to maintain the per people expenditure from the previous year due to a huge drop in fiscal revenue throughout the county, according to Steinberg. 'Revenue for the county has been greatly impacted by the economic downturn,' said MCPS Public Information Director Dana Tofig.

The waive of the law which requires that the school system match its funding for the previous year has resulted in the approval of a lower operating budget on May 27. The reduction in the final budget, which will be approved on June 8, will likely lead to a $1,000 reduction in the per person expenditure in fiscal 2011, which means that the county will be spending $1,000 less on each student than in fiscal year 2010.

In order to be considered for a waiver, a county government must provide evidence that its fiscal condition will hamper its ability to fund MoE in the coming fiscal year. Montgomery County provided documents proving its fiscal inability to maintain its currently level of funding in its request. The formal request was also required to include a letter of intent from each county.
The school systems and general public were also able to submit letters as part of the formal request, after which there was a formal hearing held before the Board of Education. 'A hearing on the waiver request was held on Tuesday [,May 25],' said Tofig, 'and the waiver was granted later in the day by a 7-5 vote.'

Because the hearing was closed to the public, the minutes, and therefore the rationale behind the decision as well as the list of how each of the Board members voted, will not be released. 'However,' said Tofig, 'it is clear the members who supported the waiver recognized the extraordinary nature of the economic downturn and took in to account that Montgomery County has always supported education well above MOE level in the past.'

According to Steinberg, Montgomery County has had a drop in the number of high-income residents in the past year, either because they have moved or because their incomes are no longer as high as they were. Consequently, the county is no longer able to garner the same amount in incomes taxes as in the previous fiscal year. 'Basically, MCPS is a billion dollars in debt,' said Hwang. 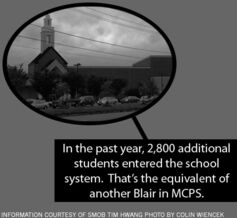 Photo:
In addition to new debt, approximately 2,800 new students have entered the school system in the past year. 'We can't afford to fund an extra 3,000 students,' said Hwang.

According to Steinberg, however, the school system also receives more state aid when the number of students increases. 'Student aid for education is based on a head count of students,' she said.