Board of Education elects new president and vice president 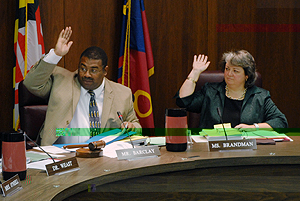 Photo: The Board of Education elected members Christopher Barclay and Shirley Brandman as president and vice president, respectively, on Tuesday.

Photo: The Board of Education elected members Christopher Barclay and Shirley Brandman as president and vice president, respectively, on Tuesday.

Barclay served as the previous vice president of the BOE from 2009 to 2010. He was first appointed to the BOE in 2006, and was elected to serve a four-year term in 2008. Earlier this year, Maryland Gov. Martin O'Malley appointed Barclay to the Maryland Council for Educator Effectiveness. Barclay believes that his previous experience on the BOE as well as in the statewide council will prove to be valuable during his term as BOE president, through both exposure to other county systems as well as networking. "The opportunity I've had to talk to educators around the state is going to be very helpful in working internally,” he said.

Brandman is serving her second four-year term as a Board member after being elected in 2006. She served as president of the BOE from 2008 to 2009 and vice president from 2006 to 2008. She also serves on the Board of Directors of the Maryland Association of Boards of Education as well as the Professional Standards and Teacher Education Board.

Barclay expressed confidence about working with Brandman throughout their terms. "She will bring a great deal of experience as a parent to the table, as well as have the temperament to collaborate with others,” he said. "I have a great deal of respect for the work she has done in education and in Montgomery County for many years.”

Over the next few months, Barclay will lead the BOE in its primary two focuses of selecting a replacement for Montgomery County Public Schools (MCPS) superintendent Jerry Weast upon his retirement as well as creating an effective budget for the county. "We will be bringing in the very best budget we can," Barclay said.

Barclay felt that both he and Bradman have assumed their positions efficiently. "So far, the transition has been very successful," he said.