Board of Education holds hearings on proposed 2012 budget

The Montgomery County Public School (MCPS) Board of Education (BOE) held two open hearings about the proposed 2012 education budget for MCPS on Jan. 12 and 19 at the Carver Educational Services Center in Rockville. The meetings focused on trying to establish a reasonable budget while maintaining MCPS's staff numbers and class sizes as well as magnets and other special programs. 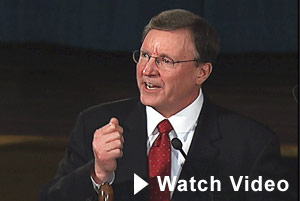 Superintendent Jerry Weast's new budget proposes no new initiatives but instead targets what Weast calls maintenance of effort, which focuses on keeping Montgomery County's reputation for academic excellence."We have never wavered in our firm commitment to provide all students with a world-class education, despite economic and political pressures. We must not waver now," the budget proposal read. Weast also requested a 2.8 percent increase in funding to cover a projected 2.3 percent increase in enrollment.

Another large focus of both meetings was the various magnet programs that MCPS offers. Students, teachers and parents from magnet schools across the county spoke on the importance of those programs. They also spoke against cutting teachers from other special programs, such as those who deal with at-risk or special education students.

Over 30 people spoke at both meetings, including education representatives, teachers, parents, and students. BOE President Christopher Barclay opened both meetings with the same speech about the importance of recognizing the difficult financial times facing the county as well as the state, the latter of which currently has a $1.6 billion budget deficit. He also emphasized measures the board has taken to help the county economically. "In the last two years alone, the board has worked hand in hand with the county to wave over $250 million owed to us in recognition of the fiscal crisis," Barclay said.

Jacobson added that passing the new budget could prove difficult. "The new budget if passed will provide maintenance of important programs, but that's far from a given," he said. Youth Commissioner on the Commission on Children and Youth Alex Abdun-Nabi agreed.
"The budget as I testified on it last night is completely optimistic and almost unrealistic. While I do applaud the efforts of the Superintendent and MCPS, I think it is time to be realistic," Nandi said.

The BOE will hold extra work sessions on the recommended budget on Jan. 26 and 27. They expect to pass the budget on Feb. 8.