Board of Education selects next MCPS superintendent

Last Monday, the Maryland Board of Education (BOE) selected Joshua P. Starr as its candidate for Montgomery County Public School (MCPS) superintendent. Following final approval from state superintendent Nancy Grasmick, Starr will assume the position on July 1 and replace Jerry Weast, who intends to formally step down and end his 12-year tenure in June. 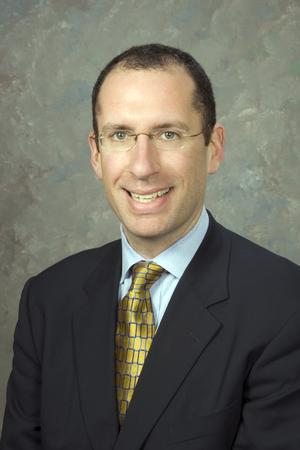 Starr is currently serving his sixth year as superintendent of schools in Stamford, Connecticut. The Connecticut district has 15,000 students, which is roughly equivalent to one-tenth of MCPS's enrollment, according to recent MCPS statistics.

Despite the population difference, Board President Christopher Barclay was confident that Starr's transition from Stamford to Montgomery County, the country's 16th-largest school district, would be a smooth one. "Starr comes to Montgomery County with impressive credentials and skill sets to lead MCPS in times of incredible challenges and opportunities,” Barclay said in a press release. "He comes to us with a deep commitment to openness and is eager to work collaboratively in the best interest of all students.”

Starr has experience dealing with the diversity that has come to define Montgomery County schools, having led a district where 60 percent of students are minority and 40 percent are on free or reduced lunch plans, according to the Washington Post. His goals are comparable to those laid out in Stamford's Strategic District Improvement Plan (SDIP): improving the curriculum, de-tracking schools, developing professional learning communities and monitoring school culture. He has consolidated Stamford middle schools that track students, thereby lessening racial and socio-economic divisions, and is known for his focused investments and his emphasis on instruction, rather than structure.

Starr received a doctorate in education administration and social policy from Harvard Graduate School of Education. He has held teaching and administrative positions in New York and New Jersey schools, and has been the Director of School Performance and Accountability for the New York City Department of Education.

Public meetings to introduce Starr to the Montgomery County community will be scheduled in the near future. To read the MCPS press release, click here.