Star-studded film shot down by ambition

"Bobby" is the title of the film. The tagline for the film is entirely about Bobby. Historical footage of Bobby begin and end the film. The film was marketed as coverage of Bobby's assassination. But instead of focusing on Robert F. Kennedy — "Bobby" — director-screenwriter Emilio Estevez centers his Faulkner-esque mosaic on the perspectives of 22 different people, and none of them are named Bobby.

With so many viewpoints, the interweaving storylines are confusing, to say the least. The Mexican kitchen employees struggle with racial discrimination. The hotel manager (William Macy) is cheating on his hairstylist wife (Sharon Stone) with the young switchboard operator (Heather Graham). Two young campaign staffers (Brian Geraghty and Shia LaBeouf) drop acid with the resident hippie (Ashton Kutcher). And a myriad of old bystanders loiter around the hotel, struggling to age gracefully. For the most part, though, the characters have little in common other than being in the Ambassador Hotel on June 6, 1968. 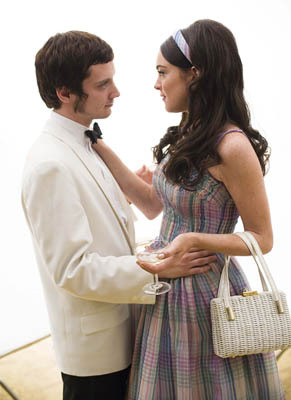 The stories carry different tones: despondence, humor, revelation; but the best word to describe the mood of the film is desperation. In a generation when racial unrest and the Vietnam War dominated politics, Bobby seemed to provide hope for a country on the rocks.

America's desperation during the 60s is best embodied by the relationship between Diane (Lindsay Lohan) and William (Elijah Wood), the classmates who plan to marry to keep William out of Vietnam. Lohan plays Diane with melancholic composure, stealing every scene with her big green eyes drenched in sincerity. "If marrying you tonight keeps you from going to Vietnam, then it's worth it," she says, and the fear that characterizes her generation becomes painfully apparent.

While the other characters all have concerns of their own, none are particularly compelling. They aren't unconvincing, but underdeveloped and to an extent, extraordinarily clichéd. Particularly baffling is the young black campaign staffer played by an equally baffled Nick Cannon, who alternates between the stereotypical angry black man and the gentle, reflective citizen with a dream. Cannon fails to realize that being bipolar does not equate to being multidimensional.

Estevez shows no commitment to his characters, as he shifts relentlessly from one scene to the next, not allowing the audience to make personal investments in any of the storylines. There are just too so many characters to keep track of — of the 22 featured characters, it's hard to justify including even half of them in the film. Estevez needs to understand that ambition does not have to be grand and quantity can never substitute for quality.

In his quest to make the movie with the most Hollywood A-listers, Estevez even forgets to relate the film back to the title character: Bobby. There is a definite sense that Bobby brings reform and hope, but the senator is never the centerpiece he should be. Viewers don't get a real sense that the characters featured in the film have anything to do with Bobby at all. If there was a deeper connection between the characters that made each one so vitally important to the film, that connection was awfully elusive.

"Bobby" isn't a bad movie, but it drags and even bores. Mired under Estevez's ambition, the real spirit of Bobby Kennedy is largely ignored and fails to resonate from behind his very large supporting cast.

"Bobby" (120 minutes, wide release) is rated R for language, drug content and a scene of violence.