The Board of Education (BOE) added expanded Student Member of the Board (SMOB) voting rights to its 2010 legislative platform in a Nov. 10 vote, according to SMOB Timothy Hwang, who introduced the proposal.

The broader legislative platform, which the BOE passed later that day, is now in the County Affairs Committee of the Montgomery County Delegation to the Maryland General Assembly, according to Hwang. There, the bill will undergo discussion and votes within the next two months, according to State Senator Jamie Raskin (D-Montgomery). If passed by the state legislature and signed by Governor Martin O'Malley, the legislation will take effect on July 1, 2010 and will increase the SMOB's authority to vote on all issues except negative personnel decisions, or employee dismissals, Hwang said. The new voting issues on which the SMOB would have clout include the MCPS budget, the construction budget, union contracts, school closings and school boundaries.

Hwang said that the 7-1 vote was an important achievement for student rights in Montgomery County and the result of years of previous SMOB efforts. "This is probably the biggest thing that the student member will do for the next couple years," he said. Hwang also said that the ability to vote on budgetary issues, a key facet of the new SMOB voting rights proposal, will become even more important in the next few years, as the BOE struggles with economic problems.

Raskin, who is one of the bill's co-sponsors in the Maryland Senate, said he is optimistic that the legislative platform will pass the Montgomery County delegation and take effect in time for next year's SMOB. "I think the chances are excellent, now that the Board itself has voted to pass it," he said. "It has been well-analyzed and well-discussed."

Current BOE member and former BOE President Shirley Brandman, who voted for the proposal, said that past and present SMOBs have demonstrated the maturity necessary to gain more power on the Board. "I think our student members of the board have proven themselves completely committed to the work, diligent in learning the issues and completely competent in being able to absorb the information and make good decisions, so I'm in favor of giving them the opportunity of making their votes count," she said.

The ability to vote for a new superintendent is not a new SMOB power, according to MCPS Student Affairs Office Coordinator Karen Crawford, but because the SMOB's potential expanded influence would coincide with the appointment of a new superintendent, next year's SMOB could be much more powerful than student members in past years, Hwang said. According to Hwang, the next SMOB will help to select a new county superintendent during the 2010-2011 school year, at the end of which Superintendent Jerry Weast plans to retire. 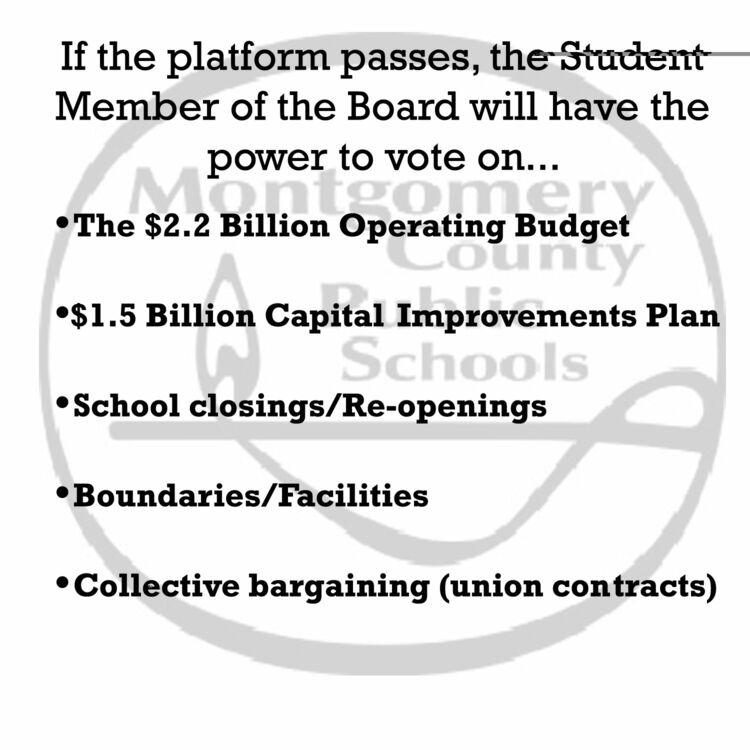 Photo:
Hwang also said that he excluded negative personnel decisions from his proposal because such issues could extend past a SMOB's one-year term, and he did not want former SMOBs to be subpoenaed after high school if legal problems ensued.

Berthiaume, who cast the lone vote against the SMOB proposal but later voted in favor of the final legislative platform, said that she supported SMOB voting rights on budget matters but not on some of the other proposed voting components, including boundary change decisions. Berthiaume said she was concerned about the increased likelihood of deadlocked votes, as the number of BOE voting members will increase to eight for most votes if the proposal passes. Berthiaume also noted her worries about potential SMOB conflicts of interest, particularly if the SMOB were acquainted with the superintendent.

Hwang said that since future BOE votes in the next few years may confront the possibilities of extreme inflation and revenue shortfalls, the next SMOB should be financially literate, especially if the new proposal passes the state government. "The student member will have to have a very strong grasp of the economic climate and the budget and what the priorities are going to be," Hwang said.

Student Government Association president and senior Alex Bae said that the proposal is a major step toward greater student representation in government, especially for its inclusion of new viewpoints. "These are things that adults have a different perspective on than students," Bae said.