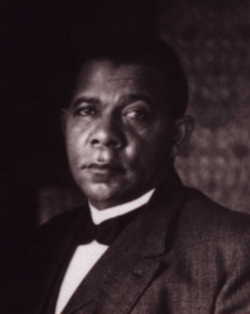 Booker T. Washington was born into slavery in 1856 but strived to become the well-known, educated man people see him as today. Recognized for founding Tuskegee Institute, Washington ensured that the school emphasized academics and practical areas for the advancement of uneducated blacks.

After the Civil War, Washington moved to West Virginia and began working in salt and coal mines at the young age of nine. In addition to completing his strenuous work, which included time as a servant, his mother also encouraged Washington to seek an education. He entered the Hampton Agricultural Institute and impressed the headmaster, who personally arranged for financial assistance to be given to Washington. After graduation, Washington worked in several jobs as a teacher and educator. During this time, the Tuskegee Institute was in its beginnings and was searching for a principal. Washington's headmaster from Hampton Agricultural Institute recommended him for the position.

While Tuskegee may have had a humble start, under Washington's leadership, it became a premier institute of education. The school had financial problems, however, because the state government never provided enough money to back the college. This prompted Washington to give speeches to fundraise and to seek funds from wealthy, white northerners, who respected the school's ambitions and objectives. In addition, Washington became an advisor to President Theodore Roosevelt and was the first African-American to dine in the White House.