Who knew cultural learnings could be so shocking, yet so funny?

Jak sie masz. My name a Simon. Silver Chips Online is send me to Americans Film Institute for review moviefilm, "Borat." You read!

Enter Borat Sagdiyev, the culturally backwards, lovably ignorant and completely fabricated alter-ego of Sacha Baron Cohen. Borat comes to America to learn about the things that don't exist in his country: rodeos, fine dining, homosexuals, women's rights, and the list just goes on. The product of his learning process is the most outrageous, outstanding, laugh-'til-your-lungs-collapse candid camera movie ever.

While millions of Baron Cohen's fans have hung onto every second of video previews released on YouTube, nothing can prepare even the most fanatical for what they will witness in "Borat." The previews show slapstick comedy and funny satire of a foreign nation that virtually nobody in this nation knows a thing about. The movie, on the other hand, shows something deeper: a very serious political and social commentary played out in a sometimes cruel, mostly outrageous and most hilarious fashion.

First off, none of the people featured in the film, other than Cohen, his co-star
Ken Davitian and the crew, knew that they were being filmed for a real, American movie. All of the people aside from the two actors waived the right to their public image under the assumption that this was a documentary about America to be shown in Kazakhstan, making this movie all the more unique, priceless, hilarious and utterly revealing about the people of this nation, but it is also the part where most of the people who hate this movie with a passion jumped off the bandwagon. 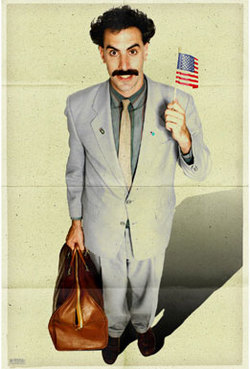 Photo: Sacha Baron Cohen is armed with a flag and ready to go in "Borat," the must-see of the year.

Photo: Sacha Baron Cohen is armed with a flag and ready to go in "Borat," the must-see of the year.

Baron Cohen basically "Punks" people across the nation"except at the end, Ashton Kutcher doesn't run out from behind a car and tell them it was all a joke. The "You've been Punk'd" part comes when these inadvertent co-stars actually see this movie and have to watch the screen as they humiliate themselves in front of an audience of millions.

Borat plays tricks on people in the style that John Stewart and his cohorts do in his videotaped interview segments. The only difference is that these interviewees don't know that Borat is kidding; they genuinely think that he is just an ignorant foreigner, and are in some cases too polite to correct his racist, sexist, homophobic and generally offensive comments. But sometimes it even goes further: some of Borat's "subjects" even go as far as to assume that since he is seemingly foreign and morally backwards, it's ok to let slip racist, sexist and homophobic comments of their own.
At some points, this kind of mortifying material can evoke a sort of palpable humiliation in the theater. During some parts, the audience actually felt embarrassed for these poor, unsuspecting but horribly unprincipled people, and at others, shocked or angered by their comments. Probably the only unsavory parts of this movie were scenes in which Cohen's style of humor is carried a little too far.

But the great part is that the line between too far and hilarious is different for every person. The parts of the movie (or maybe just all of it) that make it funny can also make it offensive. To those who can take edgy humor, such as that featured on South Park, Mind of Mencia, the Daily Show or virtually any scheduled program on Comedy Central for that matter, Borat will be hands down the funniest movie ever. For those that cringe at the slightest hint of stereotyping, they might want to stick with public access TV.

In the end, it becomes clear what the title "Cultural Learnings of America for Make Benefit Glorious Nation of Kazakhstan" means. Viewers will learn a lot about American culture, especially the unspoken, seedy undertones of how people really feel. And in a way this glaring expos" does benefit Kazakhstan, if only by making the United States look just as barbaric and morally corrupt in comparison.

But by far the most important thing to keep in mind is not to let the deeper meaning of "Borat" get in the way of the fact that it is the single funniest 84 minutes ever captured on film.

Borat (84 minutes) is rated R for pervasive strong crude and sexual content including graphic nudity, and language and playing in theaters everywhere.