Fiddle and violin virtuosos make for a hit at Strathmore

They're flashy, they're multitalented and they're in town. "Bowfire," a ten-part string group, is making its rounds across the country, bringing forth a show that will knock the socks off of instrumental music fans everywhere.

With a thrilling two hour set, "Bowfire" makes for one of the most breathtaking onstage string performances that Strathmore's music center has hosted, showing off a musical fusion of modern fiddling and classical compositions. 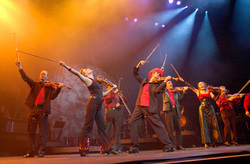 Photo: Bowfire serves up a fusion of jazz, classical, bluegrass and more in a thrilling performance at Strathmore's Music and Dance Center.

Photo: Bowfire serves up a fusion of jazz, classical, bluegrass and more in a thrilling performance at Strathmore's Music and Dance Center.

Clad in vibrant red, the ten-piece string ensemble's repertoire includes a brilliant mix of jazz, classical, bluegrass, Celtic, rock, Gypsy, world and Texas Swing pieces. And, as if that weren't wild enough, the group is accompanied by percussion, keyboard and guitar, attracting even the most unorthodox string fans.

The program includes a variety of "fiddle medleys," in which all the players take part, as well as solo performances and tap-dancing. Critically-acclaimed performer Stephanie Cadwell rises to new heights by tap-dancing and fiddling simultaneously in a traditional piece called "Growing Old Woman/Clumsy Lover," while violinist Kelli Trottier dazzles the audience with strong vocals in an original piece, "Mist Covered Mountains."

The hottest piece of the show is easily "Czardas Caprice," written by Romantic composer Vittorio Monti and performed by violinist Lara St. John. Anyone familiar with the Gypsy-esque piece know that it flaunts everything to be desired in an exciting performance: lightning-speed finger work, dramatic slides and even some left-hand pizzicato. But St. John takes Czardas well beyond its usual flare and serves up the most awe-inspiring rendition that Mr. Monti could ever ask for.

Other highlights of the show include "Galloping Horses," a piece written by composer C. Yao Xin and arranged by Bowfire director L. Solomon. George Gao stars in this one, playing the electric erhu, a Chinese stringed instrument that hardly ever makes an appearance on stage. Equally impressive is a fiddle medley composed and performed by Richard Wood, a Canadian-born fiddler and stepdancer who has appeared on "Good Morning America" and "The David Letterman Show."

Matching the pizzazz of the animated string players, the stage is alive the whole night with funky lighting and occasional bursts from a fog machine to create a mountain-top ambience. While at times the effects are a bit over the top, the on-stage energy compensates for any cheesy moments, and the incredible talent of these ten musicians will make the concert a worth-while experience for anyone looking for a great time.

Bowfire is on a nation-wide tour and will be returning to the east coast this summer.