Boys' basketball advances to second round of playoffs

Photo: Junior Issy Melton shoots for two of his 15 points.

On Wednesday's senior night, the Blair Blazers played passionate defense, clinical offense, and used veteran leadership to beat one of the lower-ranked teams in the county. Friday night's 44-37 victory over the same team vaulted the Blazers (5-16) into the second round of the playoffs, moving them one step closer to a state title.

Instead of senior leadership and experience, two of Blair's young stars, Issy Melton and Joe Dubuche, stepped up and produced a near flawless inside-outside combination, helping to down the Watkins Mill Wolverines (0-19). Head coach Mark DeStefano praised the progress and contributions the two juniors have made. "Those guys have come so far in one season. Two guys with no varsity experience who just worked their way into big games. They've really produced for us all year."

Watkins Mill, who has not been in the win column a single time this year, has had trouble with defense all season, giving up an average of 61 points a contest.

Blair started the game with the same lineup from senior night, consisting entirely of members from the class of 2007. The game nearly began with a bang for Blair when senior Ross Williams stole the ball and took it down court, but clanged his dunk attempt off of the back iron. 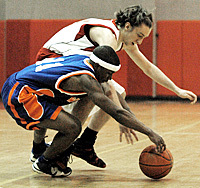 Photo: Senior Matt McClain fights for a loose ball in a first half filled with defensive lapses and poor shooting by both teams.

Photo: Senior Matt McClain fights for a loose ball in a first half filled with defensive lapses and poor shooting by both teams. Photo courtesy of Jeff Lautenberger.

The first quarter showcased the nerves from both teams, as they combined for a total of nine turnovers in the period. With 2:35 left in the period, the score was knotted at a meager 3-3. The Wolverines closed the quarter on a 5-3 run, and finished up 8-6.

Dubuche saw his first action in the second quarter, and he made his presence felt immediately. First, after Blair had given up points to the Wolverines on consecutive possessions, Dubuche hit back to back three-pointers to bring Blair back within two. Following this early shooting display, Watkins Mill's point guard sliced through Blair's defense for an easy two on two straight Wolverine possessions. Following a Blair timeout, the teams traded baskets until the halftime whistle, which came with the Wolverines still leading 19-15.

The Blazers' third quarter could arguably have been their best offensive quarter of the season. The team focused on getting the ball inside to Melton, and he delivered. The true big man poured in 10 of Blair's first 12 points of the half. Pick and rolls, dumps into the post and high screens all worked to get Melton free for easy buckets around the basket. Following The Diesel's early outburst, a Darius Smith's steal and layup put Blair back on top for the first time since the Blazers led 3-2 in the first quarter. Blair held a slim two point lead at 30-28 heading into the fourth. 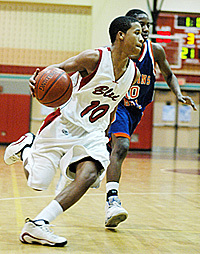 Photo: Senior Darius Smith dribbles past a Wolverine defender in the third quarter.

Dubuche and Melton teamed up to score Blair's first eight points of the final period. First, Dubuche hit his third three of the game. Then a Melton putback was followed by Debuche's fourth long-distance bomb of the night. This quick eight point run put the game out of the Wolverines' reach and solidified the victory for Blair.

While a minor celebration ensued, the cheerleaders threw souvenir red basketballs into the crowd. But the party can't last long for the Blazers as Blair must gear up to face a tough Magruder team on Monday.

After the game, Coach DeStefano was already looking ahead to the Blazers' next opponent. "People underestimate how good a defensive team they are. Donald Robinson might be the best player in Montgomery County," he said. "To beat them, we're going to have to play our best and most complete game of the season. It's a one-game season."

The Blair boys' varsity basketball team plays its next game on Feb. 25 against Magruder at 7 p.m.