After a disappointing season for the boys' varsity basketball team (3-18), it seemed most likely that Sherwood (9-12) would cruise over the lackluster Blazers. However, led by senior Dennis Mesidor, the Blazers proved that the playoffs are a new season and that they aren't going down without a fight. Coming off of two straight wins, the Blazers found a newfound desire to win and a determination to play with intensity not found in their regular season performance. 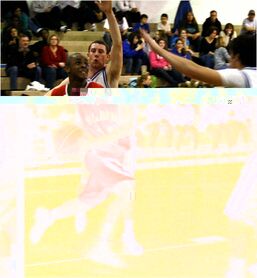 Photo: Junior Charles Ruffin looks for the shot while being closely defended.

Photo: Junior Charles Ruffin looks for the shot while being closely defended.

Throughout the season, the Blazers could never manage to close a losing margin due to missed opportunities. But despite missing 10 free throws, the Blazers were able to shut the door on Sherwood with a serious of clutch free throws and rebounds.

A key to the Blazers' playoff success was their confidence and mental toughness, which carried them through the first round. As the first team to advance in the Maryland state playoffs, it required focus and determination to ignore all criticism and play to their potential. Assistant coach Cedric Boatman was proud of the way the team played. "Many other teams would have packed away their season by now, just given up. We never gave up and kept believing," he said. "It was extremely difficult but they deserved to get that feeling of winning and being victorious." 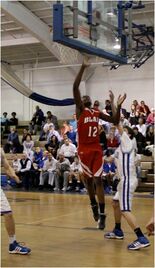 Photo: Senior Dennis Mesidor lays up a shot in the second quarter.

Photo: Senior Dennis Mesidor lays up a shot in the second quarter.

Playing with a new lineup that has won three straight games, the Blazers relied on Mesidor's clutch performance and perseverance to guide them to victory. With one of the area's top scorers on the opposing team, it was up to Mesidor to outshine and outplay him. Fortunately, Mesidor responded with a 25-point, 10-rebound double double and was 4-5 from the free throw line.

Coming out of the third quarter, the Blazers lead 33-32. They had played exceptionally throughout the game and an upset appeared at hand. But while pushing upcourt, junior Charles Ruffin botched a pass to senior Cooper Neimand, resulting in a seven-point Sherwood lead. The Blazers called a time out and head coach Mark DeStefano had some inspirational words for the players. "We've won the last three quarters, if you guys can win this last quarter we have practice tomorrow." After the speech, the Blazers brought intensity that Sherwood was unable to match, returning with stifling defense and an offense that created opportunities. 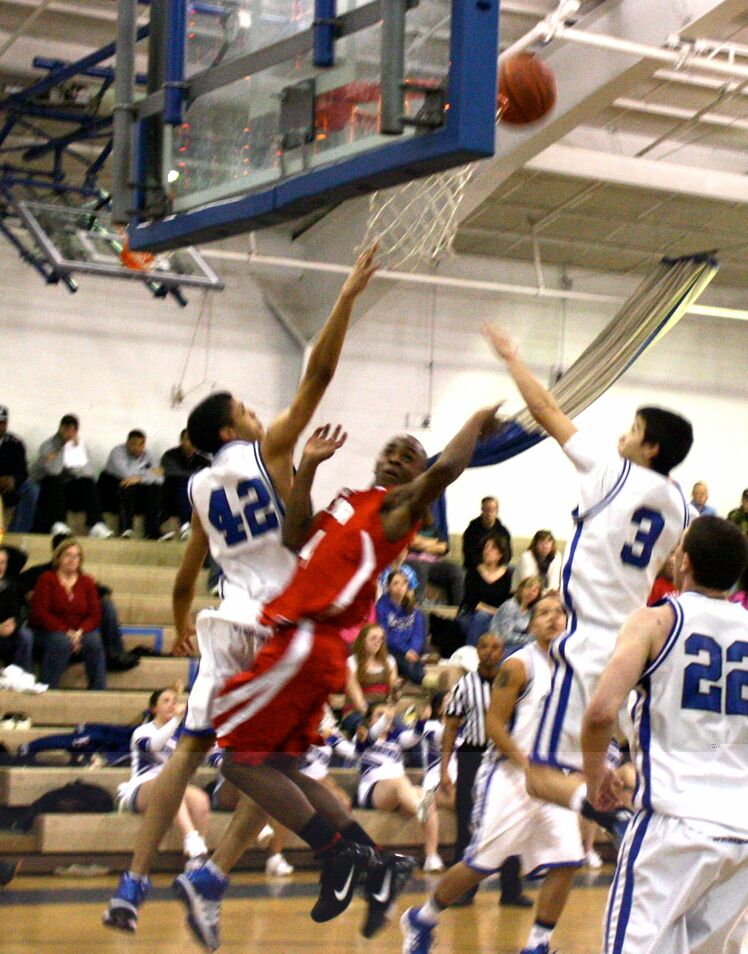 Photo: Junior Charles Ruffin gets fouled between two Sherwood players while going for a layup.

Photo: Junior Charles Ruffin gets fouled between two Sherwood players while going for a layup.

The final four minutes proved to be the most important minutes of the game, with the Blazers and the Warriors trading baskets and leads. Ruffin played the fourth quarter like it was his last and was diving and grabbing any ball that moved. His offense intensity sent him to the free throw line five times where he was able to hit two crucial free throws. With less than two minutes left, the Blazers needed points if they wanted to have a chance at winning. Ruffin went to line and sunk his first shot. With the Sherwood home crowd booing and taunting, Ruffin eyed the basket. His shot bounced off the rim and flew into the corner. A Sherwood player stepped to grab the loose ball but Ruffin was quicker; he stole back the ball and got Blair in position for another shot.

With 20 seconds left, the Blazers hit clutch free throws that nearly sealed the game in their favor. Coach DeStefano felt that the Blazers completely deserved this victory. "I'm just really proud of the way they conducted themselves through out this season. I'm happy for the kids, for the community and for the school. We all deserve this victory," he said.

The Blazers face the formidable Richard Montgomery team on Tuesday. One of the best teams in the area, Richard Montgomery has lost only two games and is on a 12-game winning streak. Senior captain Cameron Reed believed the season doesn't have anything to do with how far they'll do in the playoffs. "As the going gets tough, the tough get going," Reed said.