Everything that could possibly go wrong at the end of a basketball game, ended up doing so for the Blazers on Tuesday night. The Sherwood Warriors (9-6) capitalized on a couple of late Blair (6-9) mistakes and used an 11-2 run to grab a huge come from behind win 55-52.

The win was in the bag, or so it seemed. Early in the fourth quarter, the Blazers looked ready to run away with the game. To cap off a huge run to start the fourth, senior guard Danny Canary drove down the entire length of the court, and blew by the defense to put the Blazers up 50-41 with only two and a half minutes left. "We had them beat,” Canary said.

But then Sherwood roared back seemingly out of nowhere. In three drives down the court within the closing minutes, the Warriors converted two three point plays, and drained an open jumper to put themselves behind 52-49 with about a minute remaining. As the Blazers looked to inbound the ball following the jumper, no one could get open and Blair turned the ball over due to a five-second violation. Consequently, Sherwood was gifted the ball underneath their own basket. The Warriors kicked the ball out beyond the three-point line, where they drained a wide open three to tie the game at 52-52 with just under a minute to go.

With no shot clock at the high school level, the Blazers ran off as much of the clock as possible. With about eleven seconds left, Canary drove to the basket and tried to hit an open Jordan Cobb underneath the basket, but instead the Sherwood defender got a hand on the pass and grabbed the steal. After a quick timeout, the Warriors inbounded the ball and raced right to the hoop, where the Blazers fouled the Sherwood player.

Sherwood made the first free-throw, but missed the second. With three seconds remaining, the Blazers heaved it to half-court, where they called their last timeout. On the inbound, once again the Blazers couldn't get open, and instead called for a time out. However Blair was out of timeouts, resulting in a technical foul and a turnover, sealing the win for Sherwood.

Danny Canary led the Blazers offensively with 13 points and six assists, and junior guard Jared Williams added 12 in the loss. Meanwhile sophomore forward Julius Cobb further established himself as a main frontcourt contributor, with an impressive physical game down low in the post. He finished with 10 points and six rebounds. 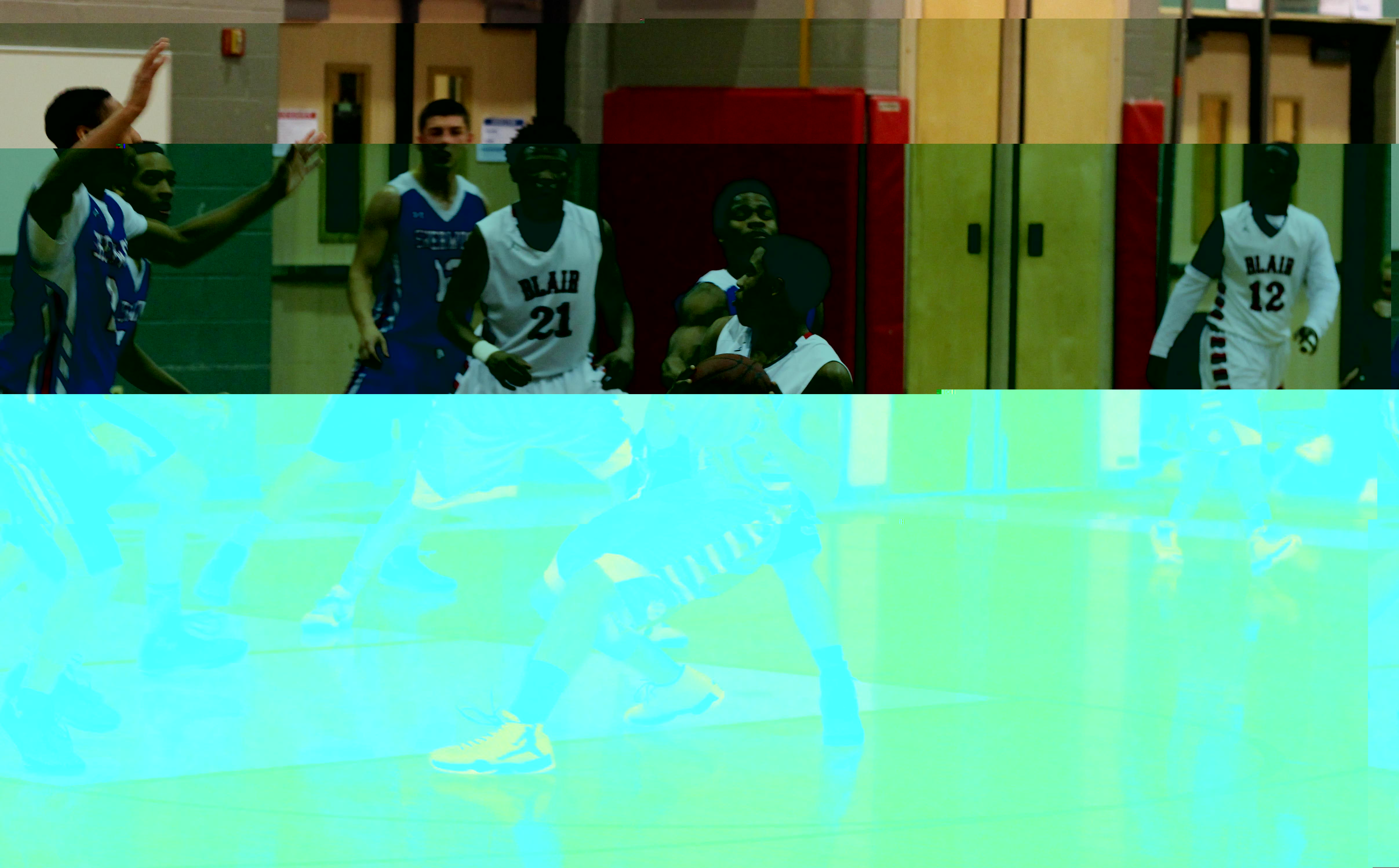 Photo: Kendall Douglas (34) tries to navigate around the Sherwood defense

Photo: Kendall Douglas (34) tries to navigate around the Sherwood defense

Sherwood caught Blair off guard at the start of the game, The Warriors busted out to a quick 8-0 lead which included a quick three and a three point conversion. Sherwood's defense forced Blair into traps and caused players to give up costly turnovers. At the end of the first, Blair was down 14-5.

After struggling to get anything going offensively, Blair employed a trap defense on the Warriors to try and turn the game around in the second quarter. Suddenly Blair started to get stops on defense, and translated them into points on the offensive end of the court. Blair went on a 12-3 run to end the first half, capping it off with a Williams three pointer to give the Blazes a 22-21 edge at the half. "Guys took it upon themselves to take care of the ball and execute and rebound, which allowed them to get more confident and start chipping away,” Pigrom said.

The third quarter was the only back and fourth quarter of the game. Blair's offense operated around Julius Cobb for most of the quarter, who had a number of offensive rebounds and put back points.

The epic collapse was not something Coach Damon Pigrom was proud of, "With two minutes to go we have to be better working as a unit,” he said. "We just need to come out strong, and finish strong,” Canary added.

"It seems like after every game its a different thing, we've learned a lot of lessons this year. We've learned how to bounce back and how to come back. Now we need to get better at finishing the game,” Pigrom said.