This one must have tasted a little sweeter. With last year's second round playoff loss fresh in their minds, the Blair boys' basketball team (2-0) rolled against the Kennedy Cavaliers (0-1) in a 62-49 victory. Anchored by a stifling defense and a collective offensive effort, the Blazers pushed their record to 2-0 on the year.

The defensive tone was set early on, as senior guard Anthony Davis swiped the ball away on Kennedy's opening possession. He cashed in with a lay-up on the other side of the court, and the Blazers were on the board first. Scoring, however, wouldn't come so easily during the rest of quarter. Kennedy and Blair both unleashed full court presses and getting the ball up court became a hassle on its own. 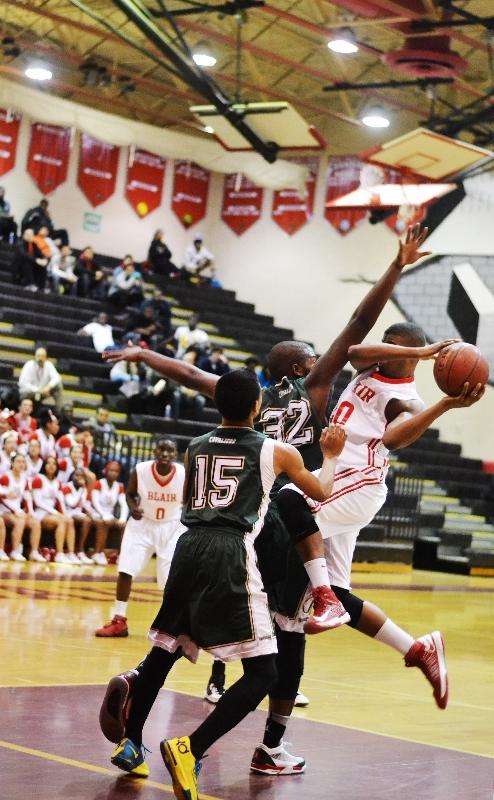 After four minutes of play, Kennedy led 6-4 and Blair's offense looked stagnant. Following a timeout, however, junior forward Jordan Johnson entered the game and promptly began infusing life into the squad. A pretty dime to senior center Raymond Burtnick gave the Blazers the lead, and by the end of the quarter, he had amassed seven points. Heading into the second quarter, the Blazers held a narrow 14-11 lead.

Every time Blair appeared to be creating some sort of separation, senior guard Keif Williams of Kennedy would answer. A beautiful layup by senior Trey Wainwright was promptly answered by an and-1 by Williams, and when Burtnick had a fastbreak score to put Blair up five, Williams came back with a three pointer to cut the lead back down to two.

It was a see-sawing affair, but Blair managed to build some momentum thanks to a dazzling assist from Wainwright to Burtnick. Then, with two seconds left in the half, Wainwright hit one of two free throws to get the lead up to 33-26. 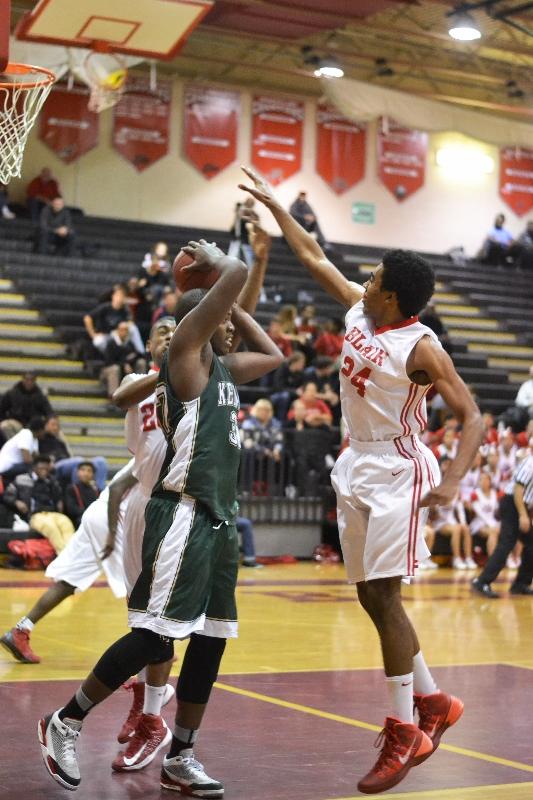 Photo: Blair's defense was stifiling throughout the game.

Photo: Blair's defense was stifiling throughout the game.

The third quarter was Blazer-dominated. Stellar defense from senior guard Damar Bess led to easy transition buckets, and an alley-oop from Wainwright to senior forward Lonnie Feldman pushed the lead up to double digits. The Kennedy press, which had hindered Blair thus far, was suddenly being broken with ease, and the Blazers went on a 17-6 run. Junior guard Danny Canary, who had been relatively quiet up to this point, poured in 11 points for the quarter, and heading into the last period of play Blair led 50-34.

The pace of the game in the final quarter deadened, as the Blazers wanted to slow things down and preserve the lead. The first points of the period came two minutes in, when Canary nailed a three from the wing. It was Bess, however, who took over the quarter on both ends of the court. Lockdown defense was complimented by smart offense. Then after converting a layup and foul shot, Bess pushed the lead to a commanding 20 points.

Sloppiness began to seep into the game as the clock ticked down, but the lead was never in serious jeopardy. With a minute left, both coaches pulled their starters and emptied the benches.

The victory was thanks to a multitude of players, and after the game, Coach Damon Pigrom stressed the importance of having a complete squad. "One of the things we pride ourselves on is being good one through five,” Pigrom said, referring to the five starters. "We don't have a quote-unquote star. We have talent, but teams that are solid from top to bottom at this level tend to do better.”

Canary, one of the captains, reflected that belief that the Blazers have almost luxurious depth. "Anyone on our team can break out at any given game,” he said.

Even with last year's defeat in mind, Pigrom doesn't believe the victory served as any sort of vengeance. "It wasn't a revenge game at all,” Pigrom explained. "They're different players from last year. It's a consortium rivalry game, but that's it.”

The team that defeated Blair last year looked very different from the current version, mainly due to the graduation of star point guard Marcus Murray. Additionally, Lonnie Feldman transferred to Blair after playing for the Cavaliers last year, further diminishing the resemblance. It might not have been a revenge game, but the blowout win was without a doubt a statement.

The Blair boys' varsity basketball team will play its next home game on December 16 against Springbrook High School at 7:00 pm.