On a successful night for the Blair indoor track team, the boys' 4x200-meter relay team placed first at the 4A Maryland State Championship, and the 4x400m relay took home the silver medal with second place in a loss by .28 seconds. With athletes entered in only five events, the boys' squad racked up 30 points by placing in each event for a fourth place finish out of 23 teams.

The boys scored points in all five events with a stellar performance from junior Jonathan Haughton, who ran on both sprint relays and placed fifth in the 55m dash and third in the 300m dash, earning two and six points respectively. Senior Nilan Schnure placed fourth in the 800m run for four points, and senior co-captain Johanna Gretschel, the only member of the girls' team to qualify for the state meet, placed sixth in the 800m run for one point. 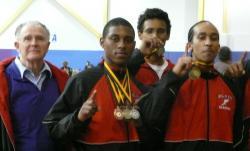 Haughton started strong for the Blazers, advancing to the final heat of the 55m dash with a time of 6.82 seconds in the preliminary round. Despite not feeling well during the race, the sprint-superstar ran a 6.78 second split in the final heat to put him in fifth place overall.

Two events later, Haughton returned for the 300m dash, where he was seeded to run in the fastest heat. Against tough competition and with little recovery time from his two previous races, Haughton ran a 36.38-second 300m for third place, giving the Blazers their first taste of metal with a bronze, the first of three medals Haughton earned on the night.

In an unofficial poll on track web site MoCo Running, users picked Blair for first place in the 4x200m relay, the next event in which the Blazer boys participated. Haughton ran the opening leg in a blazing 22.51 seconds before handing off to senior co-captain Louis Varella. Varella maintained the Blazers' lead and passed the baton to senior Chris Grindley, who rounded the 200m track for a neck-and-neck exchange to senior Mohamed Mansaray. But Mansaray pulled away down the backstretch, bringing Blair the state title in 1:31.73 seconds, .73 seconds ahead of track-powerhouse Eleanor Roosevelt High School.

The boys' 4x200 relay has excelled all season, placing second in the Montgomery County Championship Meet and first in the 4A West Regional Meet, but after an-almost disqualification and eleventh place finish at last year's indoor state championship, the boys were excited to succeed at the state level. "We've been working hard all season, and it paid off," Varella said. Haughton echoed the co-captain's sentiments, saying, "We finally got some respect."

In the next event – the 800m run – Gretschel and Schnure ran solid races to place sixth and fourth respectively. Gretschel began her race at the back of the pack and steadily moved to the middle, but was boxed in by other runners until the final 200 meters. Sprinting down the backstretch, Gretschel passed two runners to finish in sixth place at 2:23.50 seconds. 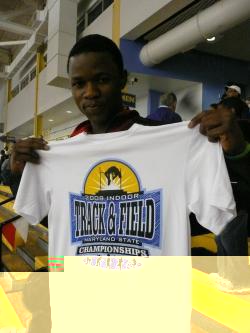 Schnure stated strong at the gun, coming through the first lap in third place before settling into fourth behind the lead pack of three runners. The gap between the top four widened as the race continued, and Schnure finished in 2:01.25 seconds.

Schnure returned one event later for the boys' 4x400m relay with Haughton, Grindley and Varella. Haughton again took the lead leg, maintaining first place into the handoff to Grindley. Grindley kept Blair's lead in the first 200 meters, but was nearly caught in the final 55 meters for a neck-and-neck handoff. In the third leg, Schnure fell back to second place but regained the lead 300 meters in. After another pace-for-pace exchange, Varella began the anchor leg in a close second place and brought Blair the lead halfway through his first lap. But as Varella and C.H. Flowers High Schools' anchor runner rounded the final turn, Varella briefly stumbled and the competitor surged a few paces ahead for the lead. Varella gave pursuit in the final 55 meters, but ultimately could not match C.H. Flowers and claimed second in an overall time of 3:31.31 seconds, .28 seconds behind the gold.

Despite the close finish in the relay, head coach Ralph Penn was pleased with the overall results of the meet and said that the team met expectations. He noted the Blazers' resilience during the meet, as several athletes competed in multiple events. Haughton ran five races and brought home a bronze, silver and gold medal, and Schnure competed in the 4x400m relay less than 20 minutes after his 800m race.

Penn also commended the team for scoring in every event entered and stated that the Blazers have the skills to win high-profile meets, but need more athletes to compete. "If we can get more people in more events, we can start winning some of these big titles. But we got a good amount of points for the few events we ran," he said. "I'm hoping that based on these results, we'll get more interest in the track team."