"Guys, we just shut out the number one team in Maryland," sophomore striker George de Rossi shouted to the mass of celebrating soccer players. Blair(5-3-1) defeated the Sherwood Warriors 2-0. Both goals were scored by senior co-captain Aaron Baldwin. The boys team brought a formidable defense to block the Warriors futile attempts to break into Blair's stronghold. 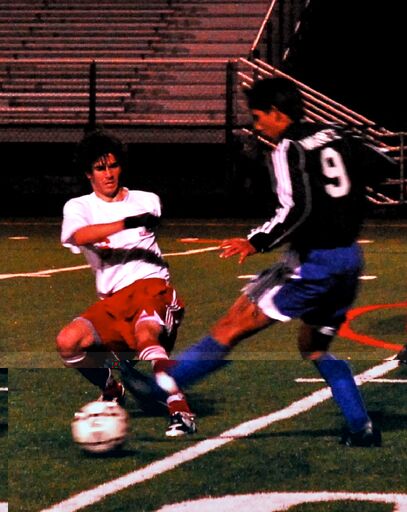 As in previous games, senior co-captain Aaron Baldwin was responsible for both goals. The first goal was scored about midway into the first half. Sophomore striker Kevin Fallet assisted the goal, passing to Baldwin, who overtook a Sherwood defender and slammed the ball past the Sherwood goalkeeper who had come out to stop the play. With about fifteen minutes left in the game, Baldwin attempted another shot, but it was blocked by the Sherwood goalie. He was able to regain control of the deflected ball, turn around and beat another defender and finally shot the ball straight into the upper left corner of the goal.

The whole team stepped up their alacrity across the field as they circled around the Warrior players. The defense, led by Xander Baldwin and senior Jaime Amaya, stopped the increasingly desperate Warriors from getting a shot off anywhere near the goal and goalie Kit Durban expertly saved any shots that came near the mark. A few minutes into the second half, a Sherwood player was able to break loose from the Blazer defense and had a clean shot on goal, but Durban was able to dive in front of the ball, preventing a Sherwood comeback. The midfield, anchored by Aaron Baldwin and senior Otis Banwell, drove the ball deep into Warrior territory, beating Sherwood players to the ball, and shooting on the goal. The offense made clean, crisp passes around Warriors and helped to keep up the pressure on goal. 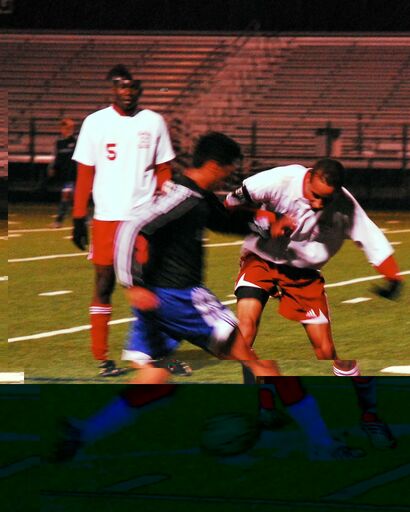 Photo: Senior Xander Baldwin maneuvers the ball to his advantage.

Photo: Senior Xander Baldwin maneuvers the ball to his advantage.

After a power outage in the stadium, shortly after Baldwin's first goal, the two teams had time to regroup, both physically and mentally. Sherwood came back onto the field with determination and intensity, but it was not enough to match the level of the Blazers. With Blair ahead by one, Sherwood maintained their formation and tried to become competitive and score. "I thought they would go more defenseive and try to stop us," head coach John Haigh said. "But they stayed on the offensive and we were able to capitalize on it."

Both the rain and the cold seemed to have an effect on several of the performances. According to Haigh, junior defender Ben Kaufman lost all color and feeling in one of his toes and had to be taken out of the game. The rain impeded ball movement on the field. "The ball was skipping on shots, and slippery on feet," senior co-captain Xander Baldwin said.

Although only two goals were scored, the Blazers had several close shots, including one by junior striker Andrew Lichter that ricocheted off the top bar of the goal. After a missed shot, the players followed through, determined to try again, as was the case with Aaron Baldwin's second goal.

The Blazers were ecstatic about taking down Sherwood and were able to maintain their intensity and skill level until the end. "We know we've got to come out hard every time," Xander Baldwin said. "And this time we caught Sherwood off guard." Haigh was extremely proud of the way his team played. "We came to play the best soccer we can play," Haigh said. "And we were able to do that."

Varsity soccer's next home game is Wednesday, Oct. 21 against Gaithersburg at 7:00 p.m.