The Blair Blazers (15-2) lost to the Meade Mustangs (16-1) 3-1 in penalty kicks Saturday night. After regulation and two overtime periods the score was 0-0 in a game dominated by two tough defensive units. The loss knocked the Blazers out of the playoffs.

The game opened slowly for Blair, who throughout the season have had difficulty starting games strong. Meade got off a couple of shots in the first ten minutes, both of which were saved easily by senior goalkeeper Charlie Waltz-Chesney. Blair's first offensive opportunity came in the 20th minute on a shot by junior forward Rolf Ngana, which was saved by the Meade keeper. 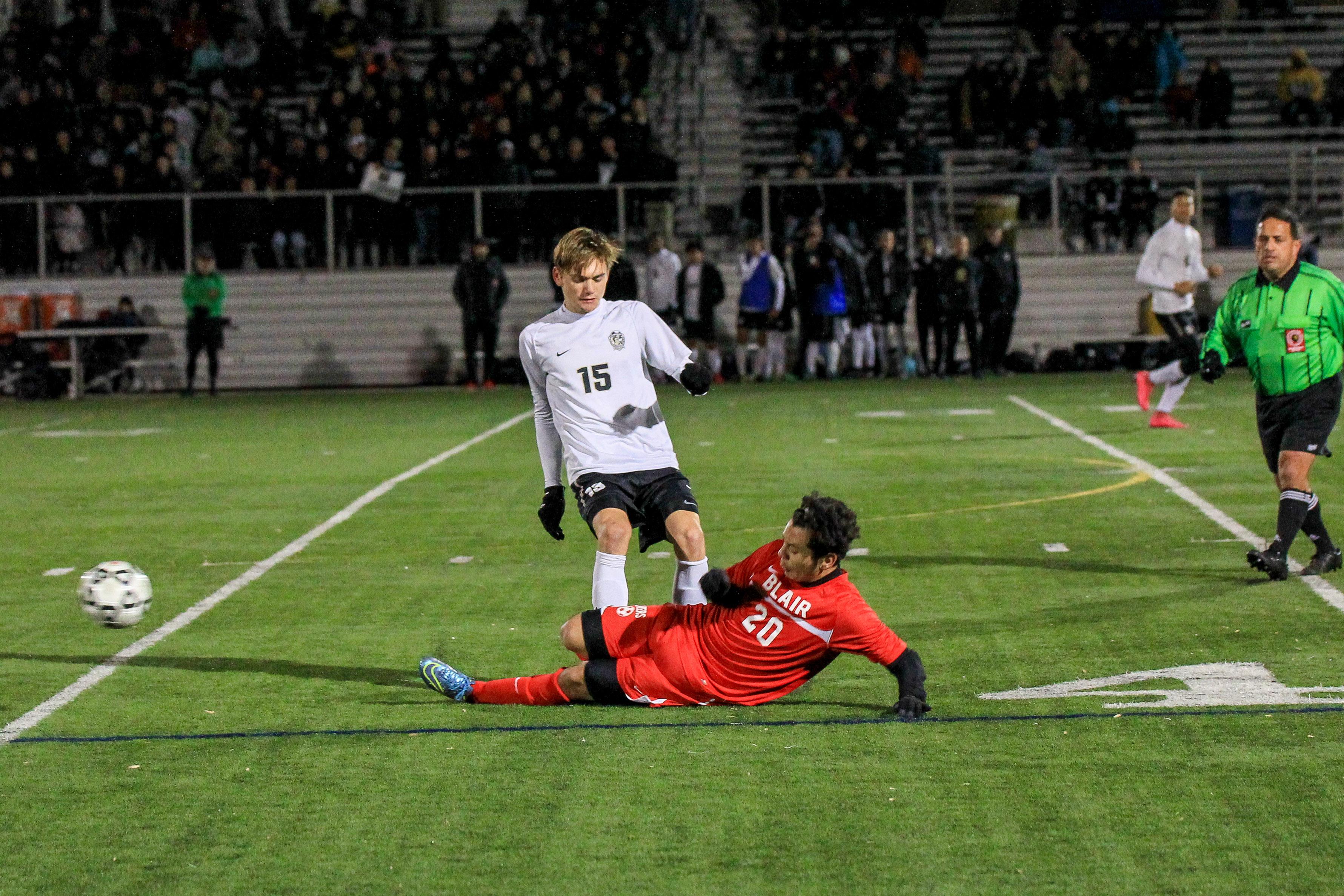 Blair came out strong in the second half, with an opportunity off of a corner in the 45th minute. The ball bounced around in the box, finally coming out to senior midfielder Ronaldo Sotelo, whose shot was well over the crossbar. Another corner three minutes later fell to senior captain Sean Munroe, whose scuffed shot was saved by the keeper.

Regulation time ended uneventfully, with a few hopeful long shots from Melendez and Munroe. When a playoff game ends in a tie, it is decided in two overtime periods. The two extra time periods saw just a few clear cut opportunities. In the first period Sotelo forced a diving save from the Meade goalkeeper, and later it was Waltz-Chesney who produced his own tough stop.

The game finished tied through regulation and two overtime periods, leading to penalty kicks. The throng of Blazers who made the trek out to Richard Montgomery to watch the game left the bleachers, leaning against the fence that kept them off of the pitch. The stadium was quieter than it had been the entire game. 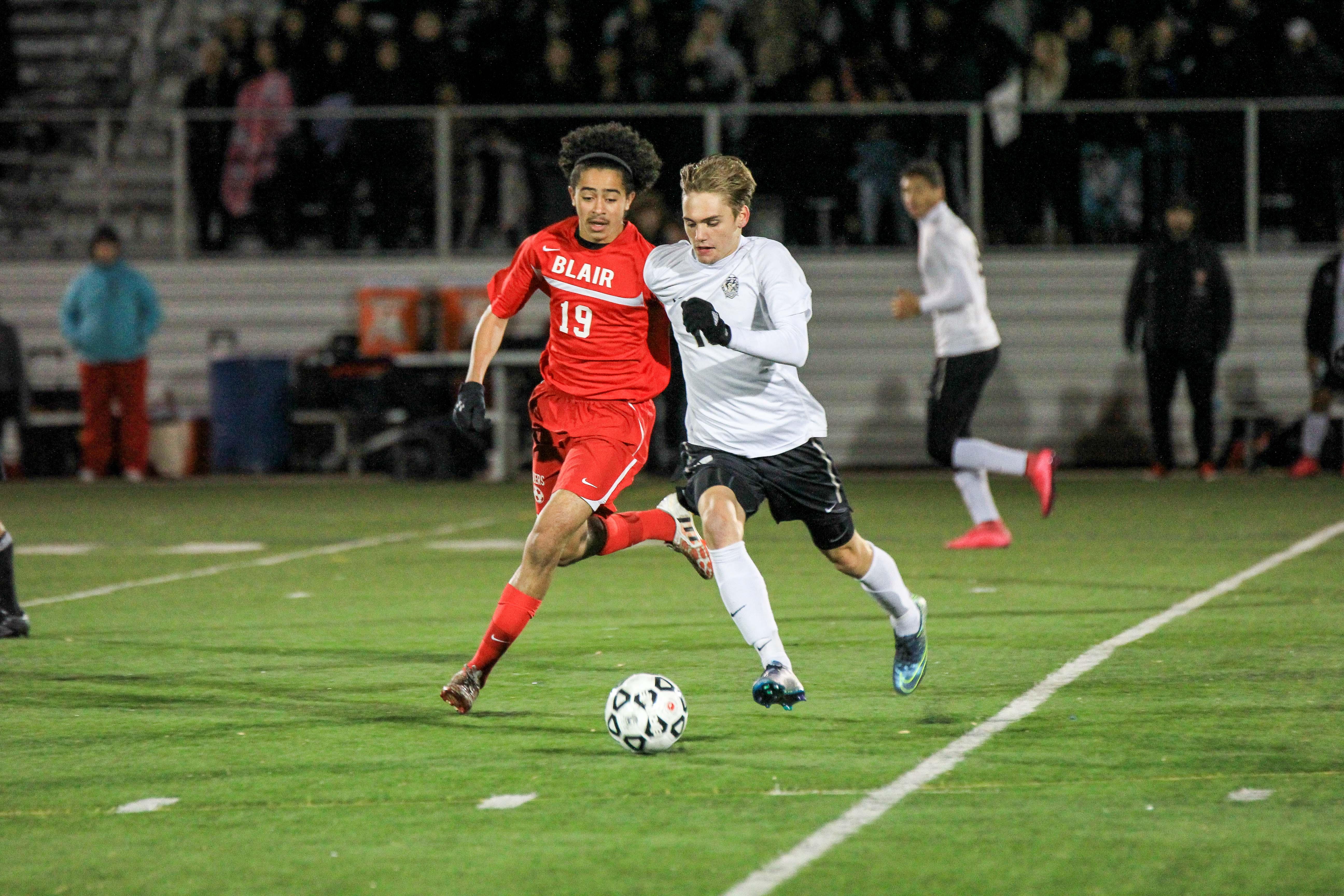 Meade scored the first penalty. Blair missed the second. Meade missed the third. Blair scored the fourth. The shots went back and forth until the score was tied at 3-3 with one shot remaining for each team. Meade put the ball in the back of the net, and the Blazers sent one off the post and out, resulting in celebrations from the Meade team.

According to senior defender Jesse Griff-McMahon, the team had come through a lot to get to this point. "We struggled through a lot, and we just got unlucky in the end,” explained Griff-McMahon. Waltz-Chesney also described the ending as unlucky, citing the two missed penalties that struck the frame of the goal.

According to Munroe, there's nothing for Blair to be disappointed about this season. "We came farther than any other Blair team has in 40 years, so that's a big accomplishment. Yeah, we lost the game, but there was nothing really to hang our heads about. We fought until the very end, and that's what's important,” said Munroe.

After one of the best seasons Blair soccer has ever seen, head coach John Haigh had a lot to say about his team and how well they played throughout the year. "They had an unbelievable season, and that's as good as it gets. When you get to these big games, it so often comes down to one play or one mistake, and in this case it came down to penalty kicks. It was a coin toss, and we lost. That shouldn't take anything away from what these guys have done,” said Haigh.

The Blazers ended the season with a record of 15-2 and having reached the semifinals of the state championship, a big accomplishment for the Blair soccer program.