The boys' swim team pulled past the Sherwood Warriors today in their first truly competitive meet of the season against the #2 boys in the Division, raising their record to 5-0 with a score of 95-74. Faced with similarly tough girls, who are ranked #1, the girls lost 66-105, making their record 2-3. However, several girls racked up some impressive times, and one sophomore Melanie Snail broke Blair's 100 Free record. 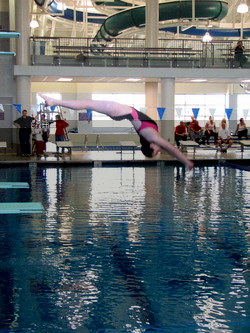 Swimming against their first real challenge this year, the boys were able to place first in several events, including the 200 Medley Relay, which was composed of junior co-captains Tim Peng, Yang Yang, senior co-captain Robert Feasley and sophomore Andrew McGehee. Yang barely beat Sherwood freshman Eric Conrad in the 200 Free for 1st place with a time of 1:48.57.

At the same time, the girls were floundering against Sherwood's superior girls' team. None of the girls was able to place first in any of the events, although some of the underclassmen received 2nd and 3rd places.

The boys were ahead of Sherwood by just a few points before the diving break, marking the first time this season that the boys faced a slim margin. But with several decisive wins, the boys inched past Sherwood. Yang and sophomore Will Shepherdson placed 1st and 2nd in the 100 Breast with times of 1:01.54 and 1:07.37. As the meet progressed to the last event, the Boys' 400 Free, both of the teams' emotions rose to a fever pitch. The boys relay team pulled off a first place, whereas the Sherwood's stacked teams won 2nd and 3rd.

The girls also put on a stronger performance in the second part of the meet; with such strong opponents, the Blair girls faced some disappointing losses and well-deserved wins. Snail broke Blair's 100 Free record by capturing first with a time of 58.12. Senior co-captain Sally Chang followed with a time of 1:00.19. In the 100 Breast, freshman Molly Branson captured first with a time of 1:13.93. 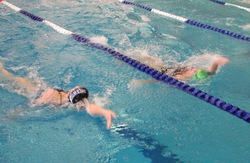 Peng bypassed the disappointment of the girls' loss and focused on the individual gains in today's meet. "The girls did get some good best times"[and they] didn't lose as much as we were expecting."

Swaney expressed his pleasure with the work the boys and girls put in during the meet, attributing the difficulty both teams had to Sherwood's overall strength. "We had a real slow first half of the meet, but people stepped it up in the second part," he said. He also commended some of the individual performances, commenting on the overall improvement as the season moves along. "Christoff [Visscher] broke the elusive 54 seconds in the 100 [Free]."

Sherwood coach Bill Schechtman echoed Swaney's enthusiasm, saying that "[the meet] was one of the most fun meets I ever had"Kudos to Blair's team for very high sportsmanship."

Despite the captains' and Swaney's optimism, Yang also voiced his dissatisfaction with the girls' overall performance. "They need to focus their attention in the right place, not like fluffy cheering," he said. He believes that, although the team spirit is important, the entire team could do more to improve their times. "[People should be asking], 'What do I need to do to get a good time?" he said.

Blair's next meet will be held next Saturday at the Martin Luther King Swim Center against Division I team Walter Johnson at 9:15 a.m.