Dark clouds and chilly weather did not hold back the boys' tennis team (3-1) as they dominated the Sherwood Warriors, winning the by a clean score of 7-0. The easy victory against the Division II was expected, according to Hanan Guzman. 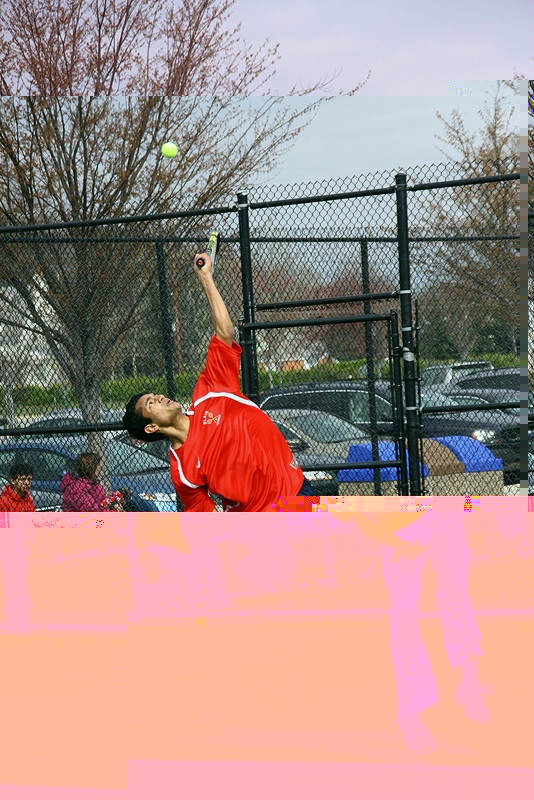 Photo: Ajay Kannan prepares to hit the ball over the net.

Photo: Ajay Kannan prepares to hit the ball over the net. Photo courtesy of Tolu Omokehinde.

Sophomore third doubles player Alex Song beat the Sherwood pair by a score of 6-0 in both sets. "It was actually too easy," Song said. But Song believed that he and his teammates could still use some improvement, particularly in serves.

Freshman Arvind Kannan faced a more competitive match than Song, due mostly to faults in his own playing. "I fought hard, but I didn't play really well," Kannan said. Kannan still managed to maintain the lead throughout the match and beat his opponent, Jesse Beattie, by a score of 6-2 in the first set and 6-3 in the second set. He plans to focus on his backhand swings before their next match to ensure a quicker victory.

According to coach David Ngbea, the team needs to work on their agility in volleying. He also wants to see his players continue to stay moving and on their toes during games. He believes this will lead to more balls over the net and more confident play.

While the easy win sparked confidence in the team, they plan to work hard to conquer their Division I players in upcoming games.

The boys' tennis team will play its next home match on Thursday, April 7 against Wootton at 3:30 p.m.