Blazers fail to get an advantage after a grueling battle

The first scoring opportunity of the game for Blair came in the sixth minute, when junior winger Kevin Amaya sent a through ball to senior striker Rolf Ngana which was stopped by the advancing Churchill goalie. Five minutes later, senior captain Jordi Long sent a ball on to junior midfielder Francisco Morales, and it was stopped once again by the opposing keeper.

The Bulldogs' first chance came in the 21st minute when a volley came in off of a corner kick and was saved by senior goalkeeper Ricky Benitez. Benitez was called into action once again four minutes later, when he came out on a free kick to catch a lofted ball. On the ensuing fast break, Long sent a cross to Amaya who struck the ball wide left. The Blazers earned back to back corners in the 32nd minute, and both turned into high shots by Long.

With three minutes left in the first half, one of Churchill's shots from outside the box ricocheted off of a Blair defender, unluckily bouncing into the back corner of the net and giving Churchill a 1-0 lead going into the half. According to Benitez, Blair played well in the first half despite the resulting score. "We started out really good, we played our game, and we really dominated in the midfield," explains Benitez.

The second half started out much like the first, with neither team gaining any ground. Blair's first shot of the half came from senior captain Austin Kokkinakis in the 47th minute and sailed well over the bar. Kokkinakis got another chance off of a long corner kick five minutes later, drilling the ball off of the bottom of the crossbar, and Ngana headed the rebound home, tying the game at a goal apiece.

In the 57th minute Amaya tried an ambitious bicycle kick which was saved by the Churchill keeper, marking Blair's last true scoring opportunity of regulation. The Bulldogs attempted two shots to close the game, both of which were saved by Benitez. 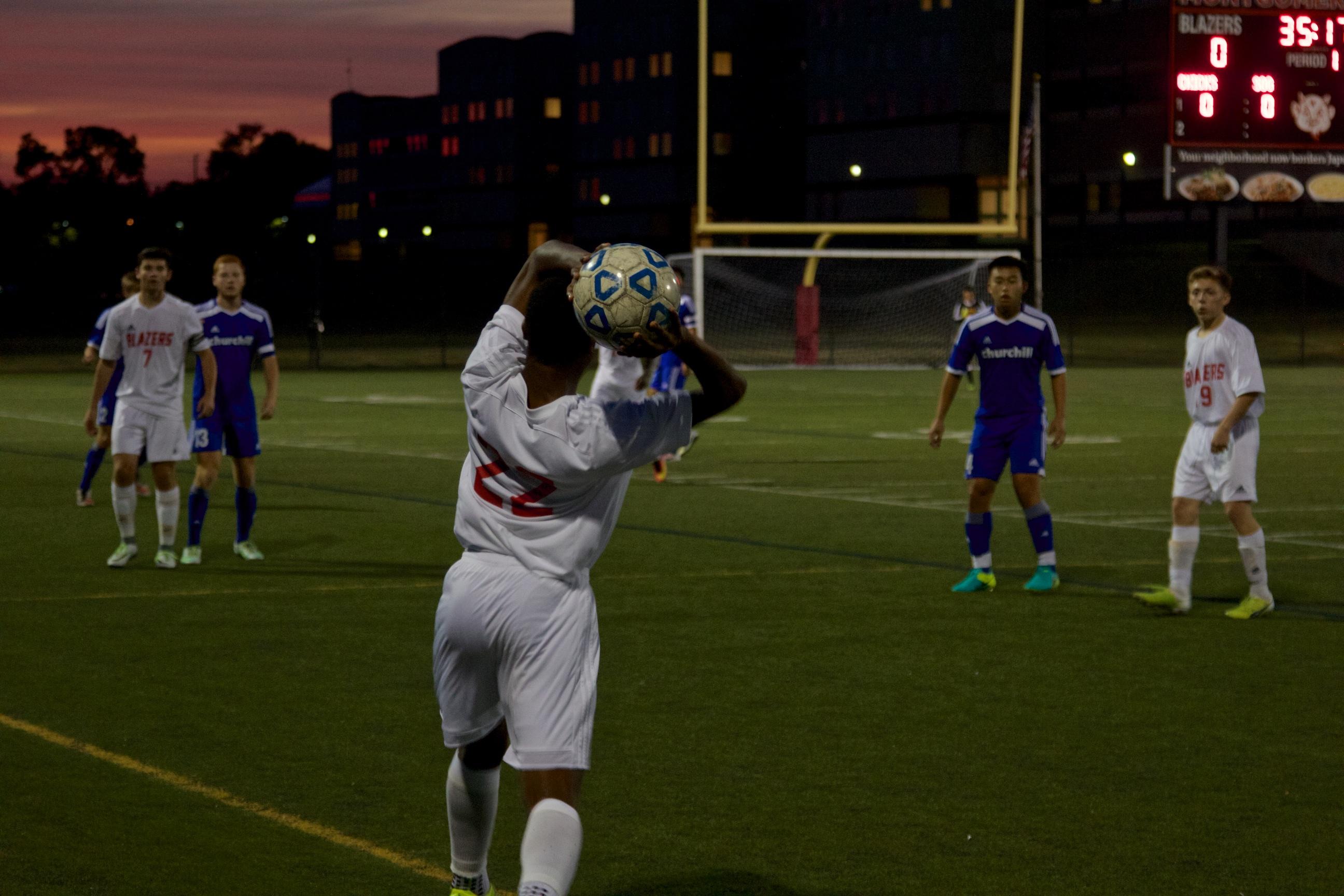 The first overtime period was relatively quiet, with Benitez saving two shots and the Blazers' only attempt coming from sophomore Henristote Okombi on a long shot which flew high. The second overtime featured three more big saves by Benitez and one key last minute header clear by senior midfielder Keva Chawla, ending the game in a tie.

According to Ngana, the team showed considerable resolve in coming back from a 1-0 deficit. "I think the team played really well, early on we were slacking, but, yeah, we came back, and in the end we were just out of luck," says Ngana.

Moving forward, the team needs to put away more of their offensive opportunities. According to Chawla, "We need to work on finishing. Speeding up our passing, slowing things down on defense, but most importantly, finishing."

The Blazers hope to return to winning ways on Tuesday at 7:15 when they welcome the Bethesda-Chevy Chase Barons (4-2-1).