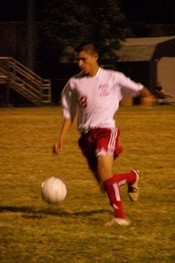 Despite a close game and a solid defensive effort, Blair's varsity boys' soccer team fell 1-0 to the Walter Johnson Wildcats on Monday night. The team falls to 2-6-1 on the season after the loss. Both teams played dominant defense and kept possession of the ball equally. However, Blair's inability to capitalize on set pieces or defend them ultimately gave the Wildcats a win.

The game began with both defenses holding strong against their opponent's attacks. Blair was able to hold off a quick attack by the Wildcats in the opening minutes and tried to launch a counter, but could not get anything. The Blazer defense held off numerous Wildcat free kicks and corner kicks early in the half, with senior goalkeeper Jonathan Fortuna making a few great saves to keep the game tied.

Blair saw their share of opportunities when senior co-captain midfielder Sergio Quisquinay had a pair of free kicks into the box, but neither of them resulted in a Blazer goal.

Head coach Adrian Baez tried to ignite the Blazer offense, putting junior forward Wayne Henderson into the game. However, the Blazers were still unable to get anything going as the half persisted with uneventful dribbling and passing by both teams. The Wildcats saw an opportunity late in the half, intercepting a pass in Blazer territory, but their shot from 20 yards out went wide of the goal. 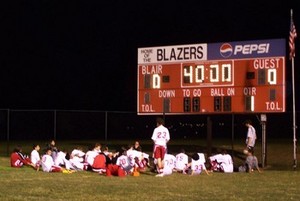 Photo: The Blazers get a breather at halftime of their Monday night match.

Photo: The Blazers get a breather at halftime of their Monday night match. Photo courtesy of Julia Seiger.

The Wildcat offense came out charging during the second half. Fortuna was forced to make some spectacular saves as set pieces and drives by Walter Johnson kept the ball in the Blazer half.

Twelve minutes into the half, a Wildcat free kick from midfield found its way into the box and headed into the net for what would be the deciding goal. Despite the deficit though, the Blazer offense did not give up. They continued to attack aggressively and managed to secure some free kicks deep in Wildcat territory, but were ultimately unable to score.

The Blazers dodged a bullet when a Wildcat forward made a move past Fortuna and took a shot from a few yards out that went wide left of an empty net. Late in the half, trying to find a spark, Baez threw senior Jimmy Diaz into the game for sophomore midfielder Aaron Baldwin, but to no effect.

With only a couple minutes left on the clock, Quisquinay sent a free kick from midfield into the box, where it was headed in the air a few times 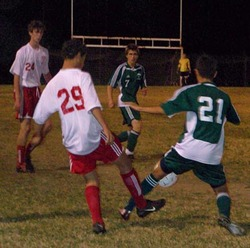 Photo: Sophomore George Baldwin (29) fights for the ball against Walter Johnson as junior Mike McClain (24) looks on. The Blazers lost on Monday night, 1-0.

before a Blazer foul gave the Wildcats a free kick. On what turned out to be the very last play of the game for the Blazers, Quisquinay took a free kick from 30 yards out that sailed over the goal, leaving the Blazers with a 1-0 loss.

Despite the final score, the team was pleased with their performance. "I'm really proud of us," said senior co-captain Tim Visclosky. "We played our hearts out despite what the scoreboard says."

Baez saw improvement in the Blazer team. "What I saw is that we're matching up in the midfield much more," he said. "Our level has stepped up. Hopefully we'll get some Ws out of that." Both Baez and Visclosky agree that the team needs to work on taking set pieces and marking up against them.