Blair loses to Magruder in overtime, 3-2

Heads hung low, the Blair varsity soccer team (3-1-1) sulked as they walked off the field at the end of their game against Magruder, crushed by their first loss of the season, 3-2. The arduous fight ended in overtime after Blair gave up a two-goal lead in the last 15 minutes of regulation.

The heartbreaking goal came three minutes into overtime after a Magruder striker found an opening in Blair's defense and swiftly kicked the ball into the left corner of the goal, narrowly missing the fingertips of senior keeper Alexis Castillo. 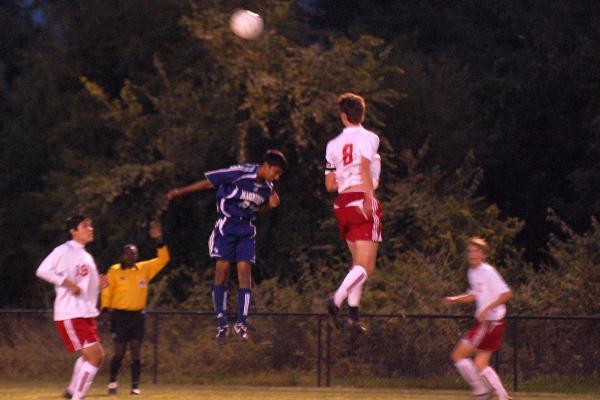 Photo: Senior captain Mike McClain jumps the extra mile to get the ball from the Magruder offense.

Photo: Senior captain Mike McClain jumps the extra mile to get the ball from the Magruder offense.

The Colonels, coming off of their 2007 State Championship win, were the Blazers' most formidable opponents in the season thus far. Nevertheless, Blair managed to play toe-to-toe with Magruder for the majority of the game. Though disappointed by how the game ended, coach Adrian Baez is proud of his team's overall effort. "We were right up there with a great team," he said.
Blair's desire to win was apparent in the first half, as the Blazers wasted no time stepping up to their opponent's level, something they had had difficulty doing in previous games. "This [game] taught them to play the whole 90 minutes," Baez said.

Because of the immediate and sharp competition on the field, Blair did not gain an opportunity to shoot until the 20th minute, when senior co-captain Mike McClain attempted a header into the goal off a corner kick from senior Mikey Funes. Junior midfielder Erik Opsahl managed to beat multiple Magruder players as he made his way towards the goal. Attempts by Opsahl and other Blazers to score were unsuccessful before the end of the half, leaving the score 0-0.

Magruder also had difficulty scoring in the first half because of strong defensive plays from the Blazers. Junior defender Alexander Baldwin played a solid game, stealing the ball from the Colonels multiple times. In the 30th minute, a Magruder player made his way towards goal, beating three Blazers until Baldwin skillfully tackled him, moving the ball back up the field. 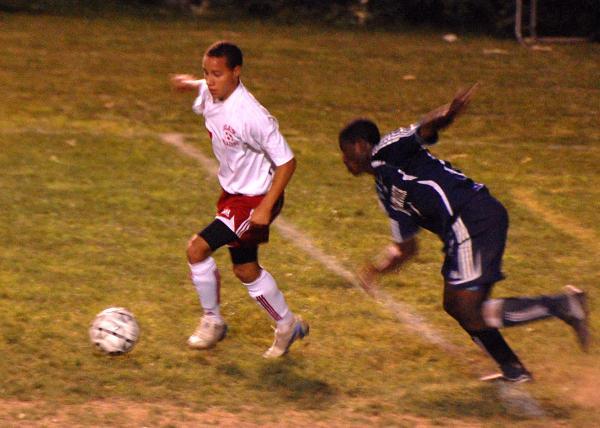 In the second half, freshman midfielder Jorge Pacheco scored the first goal of the game thanks to a cross from McClain in the 51st minute. Blair's second goal came only four minutes later when the two teamed up again. This time the goal came off a strong kick from McClain with an assist by Pacheco, giving the Blazers a 2-0 lead.

The Colonels did not give up though, managing to score off of a free kick in the 61st minute. "They got the ball up and it was in and that was it," Baez said.

With the game close, Blair took multiple shots on Magruder, none able to hit the net. With four minutes left in regulation, a corner kick for Magruder allowed a forward to head the ball into Blair's goal, tying the game 2-2. "We had them down but we let them up," Baez said. The Colonels went on to win the game 3-2.

Though the frustration of the close loss affected team morale at the conclusion of the game, Funes was optimistic about future games. "We have to learn from this," he said. "We still have playoffs to get them back."

The varsity boys' soccer team plays its next home game on Sept. 27 against Springbrook at 12:00 p.m.