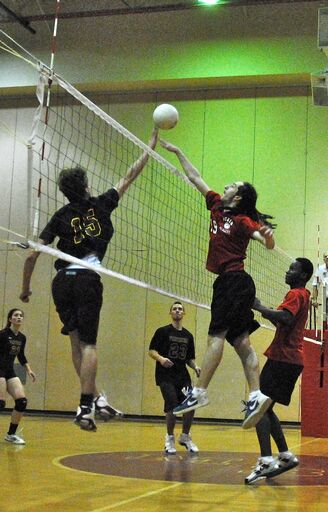 Photo: Senior Devin Peck delivers a powerful blow to the ball, sending it to the other side.

Photo: Senior Devin Peck delivers a powerful blow to the ball, sending it to the other side.

In their first home game of the season, the boys' varsity volleyball team securely defeated the Paint Branch Panthers in three straight sets. The Blazers gained an advantage early on in the game, achieving an 11-point head within the first 10 minutes. Through consistent returns and assists, as well as a strong offense, the boys accomplished an easy and well-deserved win.

The Blazers finished strong throughout their last set, achieving the most decisive win of the night, 25 - 5. The team picked up the intensity, following a few mistakes due to miscommunication among the players in the last half of the second set. Though the team finished the second set with a 14-point lead, confusion arose over who would return the ball. "We lost out focus on the second set," head coach Chris Liang said. "They let down their guard."

The last set began in Blair's favor, with junior co-captain Robert Huang acing the Panthers in this first serve. Throughout the set, the unforgiving Blazers exploited the vulnerable Paint Branch defense time and time again with powerful spikes and close saves. Sophomore co-captain Andy Zhang served eight straight points, bringing the score to 18 - 3 near the end of the set. By this time, Zhang served eight of the total 18 aces and executed seven of the team's 29 kills. 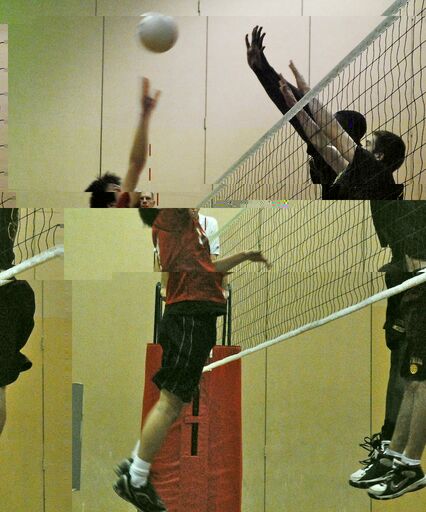 Photo: Senior Lawrence Cho tips the ball over the edge.

Photo: Senior Lawrence Cho tips the ball over the edge.

As the game drew to a close, the Blazers began losing focus and executing more sloppy sets. Despite this failure to set quickly, the boys' team was able to finish the game with a 20-point lead.

The Blazers' strong performance in the first set determined the trend for the rest of the game. A few minutes into the set, the score was 17 - 6 in the Blazers' favor. The team finished the set with a 17-point lead.

Senior co-captain Pin-Joe Ko was happy with the team's win. "I think we played really solidly," he said. "I think that we were talking to each other a lot more, but we can still work on communication."

Ko was proud of about his team's victory, but he was especially pleased with the even distribution of time players received on the court. Every member of the team had an opportunity to play and gain court experience. "We played all of our bench players," he said. "We hope to keep doing this so that we can give them game experience."

The Blazers' next home game is Friday, April 9 against Walter Johnson at 5:15 p.m.