For the second game in a row, the Blair boys' volleyball team was able to defeat its opponent in three straight sets, first the Watkins Mill Wolverines and on Thursday the Einstein Titans (25-7, 25-3 and 25-9). Blazers pulled away quickly in the first set and kept the lead throughout all sets to secure the second win of the season and capture a winning record (2-1).

Blazers started the first set with a strong kill from junior middle hitter Nick Vujcic and had a 5-0 run early in the game to gain the edge at 7-1. Einstein quickly called a timeout to talk over strategy and how to return Blair's powerful serves. However, Blazers continued to dominate the game with two strong serves followed by two quick kills to bring the score to 11-2. The Titans started a comeback but the 5-2 Einstein run was not enough to eat away from their large deficit. Einstein was plagued with miscommunication and net faults, which allowed Blair to pull off a 4-0 run. With sophomore Pin-Joe Ko's two aces and senior Jefferson Teng's deadly kill, the first set ended 25-7. 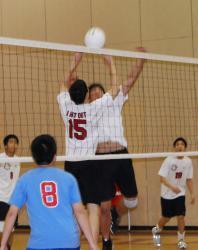 Freshman Robert Huang aced the first serve to set the tempo for the rest of the second set. Einstein was not able to return Blair's two next serves, and when they did, Vujcic was there to spike the ball back to give his team a 4-0 lead. Co-captain junior Willy Li took advantage of Einstein's poor court coverage to give Blazers another point and keep up the rally. Einstein was forced to call the first timeout of the set when co-captain junior Bryan Huang finessed the ball over the net to give Blair 10 straight points. Upon return to the court, Blazers faltered and gave Einstein one point. But Bryan Huang kept up the strong performance and finished the set with seven aces, 25-3.

Blair dominated the third set as well, but Einstein was able to capitalize on Blair's weaknesses to score nine points. Nonetheless, the boys started strong in the first half of the set. Although Titans dove for several balls, they were not able to bank any points because of Blair's improving passing and stingy defense. Ko - who had two aces in the first set - gave Blair a decisive lead (10-2) with seven more aces. Li contributes with two more aces and puts Blair on top 18-3. Because of the large lead, Blair started to lose its focus and forgot to cover critical spots on the court. Einstein noticed the sloppiness and used the opportunity to score three straight points to cut the lead to nine points. However Einstein's late game rally was not enough, as Blazers served consistently. The set finally ended with an Einstein line fault, 25-9.

Overall, head coach Chris Liang was pleased with the team's performance and commended the players' strong hits and serves. "It was a good game," Liang says. "I am very satisfied with the team." Blair used this game to improve on critical aspects such as communication and passing on the court. Robert Huang noticed the increase in team chemistry and believes that it will help Blair against tough teams like Sherwood. "Not only did our passing get better, but we are really gelling as a team," he said. Although Blair continues to strengthen its weak spots, the players need to work harder to cover the court. Einstein was not able to fully take advantage of this dangerous hole, but stronger opponents will use this weakness.

Despite the loss, Einstein head coach Emily Hallam was excited for her players. Because Einstein did not have a boys' team last year, Hallam emphasized the need for experience and confidence. "It's not a rebuilding year but a building year. The players just need to start believing in themselves," she said.

The boys' volleyball team plays its next game at Sherwood at 5:15 pm.

Sahar Shahamatdar. What should I put in Sahar's profile? I am Xerxes' great^9 grand daughter all i desire is earth and water. I hate Spartans. especially Sean. More »