Blair's boys' volleyball team beat the Sherwood Warriors for the volleyball county championship yesterday, 25-21, 26-24 and 25-18. After only three sets, the Blazers emerged victorious with their second straight title.

The story of last year's win was about an underdog who came from behind in the playoffs, beating the very teams it lost to in the regular season. This year's story was about a team recuperating after the loss of six key players. With only one senior starter on the team this year, the boys' volleyball team faced the challenge of building their newer and younger players, according to last year's coach, JJ Rathnam. They met the challenge successfully and managed an almost perfect season record of 12-1. Their only loss was against the Sherwood Warriors, which ended with a heartbreaking fifth set that reflected the caliber of both teams.

Last night was Blair's second chance to prove itself. As students, teachers and alumni cheered in the stands, the Blazers faced the Warriors down with a newfound maturity on the court that the Blazers had developed since their last confrontation against Sherwood's boys. Although the game's scores were close, the Blazers showed that they were the dominant team of the county.

The first game of the match started off neck and neck. Sherwood forged forward with the first point in the match, but then served to the net. As the game wore on, both teams exchanged points with each other, hitting either out or into the net. After coming back from the timeout, junior Max Wolf hit strongly into the hole in the center. At 13-13, junior co-captain Jay Chang hit hard into two Sherwood blockers who were unable to contain the ball. The solid teamwork among players enabled them to gain the lead against the Warriors. Co-captain junior Tim Lee reliably defended the hits, enabling freshman Willy Li's solid sets to assist junior Allen Zhang, Wolf and Chang in hitting effectively throughout the first set. Senior Adrian Cretzu's serves helped the boys to break away from the tie and create a small two-point lead. Zhang tipped the ball after a brief exchange between the teams' blockers to end the set, 25-21.

Photo: Junior Max Wolf rises several feet into the air to prepare for one of his characteristically strong and consistent hits.

Photo: Junior Max Wolf rises several feet into the air to prepare for one of his characteristically strong and consistent hits.

The second set of the match was the closest of the three games. But the close score was due to the boys' careless errors and the Warriors' determination to use these mistakes to their advantage. The score was close again at the beginning of the game. Unforced errors gave costly points to Sherwood, but Blair strategically set to the hole, throwing off Sherwood. The Blazers capitalized on their momentum, and at 13-14, Sherwood was falling apart.

After an exchange of unforced errors, Sherwood finally fell behind as Li produced four successful serves. By the second set, the Warriors' weaknesses were exposed: although they were able to receive and hit strongly, the holes in their playing formation weakened their punch. Even after an amazing show of Sherwood's miraculous saves, which had the ball flying all over the court and Sherwood players in the risers, the Warriors lost another crucial point. In the end, the Blazers pushed for two points that ended the match, 26-24.

The Blazers started the third set with confidence to finish the match Junior Tim He played off the ankle injury he had sustained in Tuesday's game to make well-placed hits set by Li into the center of Sherwood territory, which was their Achille's heel. He and Zhang made a formidable blocking pair as Cretzu made consistently strong hits to contribute to Blair's score.

Zhang made a series of jump serves until Blair's rally ended at 10-6. Even though they were in the lead at the Sherwood timeout, at 19-13, none of the Blazers let his guard down in the crucial last moments. In the end, the focus and determination in each player pulled off the final win, ending their championship run at 25-18 when Zhang's strong hit decisively smashed onto Sherwood's floor.

The audience, who had anxiously bated their breaths, unleashed their pent up enthusiasm immediately. A swarm of red moved down to the gym floor to engulf the boys as the win was still fresh in their minds.

Later on, Lee profusely expressed his happiness for all the support. "Thanks to all the fans, especially tonight, and thank you to the fans who came when the games were so boring," he said. 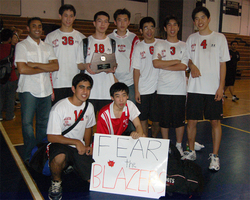 Chang, who also has another championship title under his belt, praised his boys and Sherwood's. "Both teams played a really good game," he said. Coach Sang Ahn agreed and went on to explain that most championship games are not an issue of who wins, but who loses. "[Sherwood] put up a really good fight... It was just us who walked in with the better day," he said.

Regardless of which team walked in with a better day, the boys' grins did little but betray the ecstasy they all felt for the win. Crowned as the champions of a county that turns out the most players in area Division I college ball, the boys' volleyball team have achieved, for the second year in a row, the highest honor any county volleyball team can win. More importantly, the season has been one of growth, both physically and mentally. Although many of the boys suffered from serious injuries, most of the players determinedly continued the season.

They can do it all over again next year. Guess we'll find out.