Dollz come to big screen in a nightmare

The dolls with collagen-enhanced lips, big exotic eyes and no noses have stepped off toy shelves, first into an animated TV series and, now a feature-length film. Unfortunately, "Bratz," the second film this summer based on a toy, is too asinine and hysterical to attract a wide audience - it attempts to dazzle moviegoers with fashion, makeup and shoes, hoping that they won't notice any other aspects (or lack thereof) of the movie. In other words, "Bratz" will be delightful for tween girls, and incredibly painful for everyone else. 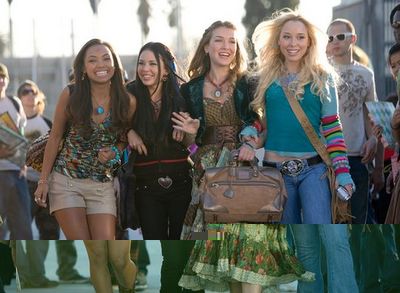 Photo: The Bratz on their first day of high school. Photo courtesy of Lionsgate films

Photo: The Bratz on their first day of high school. Photo courtesy of Lionsgate films

Just another movie about triumphing over the social pressures of high school, "Bratz" features the four original dolls, Chloe (Skyler Shaye), Yasmin (Nathalia Ramos), Jade (Janel Parrish) and Sasha (Logan Browning), as they enter high school and clash with school president Meredith (Chelsea Staub), the spoiled daughter of Principal Dimly (Jon Voight). Meredith rules Carry Nation High with an iron grip, enforcing the rules of social cliques. The four girls each join different cliques and grow farther and farther apart, but join together again in their junior year to fight peer pressure and "be themselves."

The screenplay is so repulsive and distasteful that it looks like a fifth-grader's attempt to imagine high school. Every morning, the group members compare outfit ideas using web-cameras. They have a hand shake, redolent of that of the three musketeers, that involves shouting "B-F-F-s" and the dialogue runs along the lines of "I love this lip gloss! It's just, like, so shiny!" and "Work the IQ, girl, but don't lose your passion for fashion!"

With such a script, it's almost needless to say that the acting is just as bad, if not worse. Shaye, Ramos, Parrish and Browning all deliver lackluster performances, which they attempt to rectify with high-pitched giggles and squeals. All four of the "Bratz" look like college freshmen and act like middle schoolers, which just adds to the ridiculousness of the entire movie.

Furthermore, the high school stereotypes that are taken to extremes attempt to charm, but wind up seeming more grotesque than comical. The cliques at Carry Nation High range from the jocks to the "people-who-dress-like-dinosaurs." The four girls, although based on the dolls, are also subject to ethnic stereotypes. Yasmin, the Hispanic of the four girls, walks by the mariachi band sitting at her kitchen table without even a second glance, and at one point sings "La Cucaracha" with her mother.

"Bratz" does get one thing right: it attempts to further individualism and "expressing yourself." Unfortunately, this message is all but lost, as "Bratz" also promotes a consumerist culture and the pop-culture definition of "cool" – where girls buy new shoes every week, absolutely have to go to all the big parties and need fabulous new outfits for said parties. Oh, and don't worry – if you're too poor to afford a new outfit like Chloe is, no problem! All you have to do is find a rich friend who will give you a gift certificate.

The four shallow and vapid bratz are utterly infatuated with shoes, makeup and fashion – but anyone familiar with the dolls probably expected as much. Appealing to a narrow population, "Bratz" will charm only those who enjoy the dollz. No one outside the demographic of clique-ish tween girls should be forced to see this movie unless absolutely necessary.

Bratz (110 minutes) is rated PG for thematic elements, and is now playing in theaters everywhere.