340s hallway sectioned off for rest of day

A heating unit coil in the ceiling above the 340s hallway broke down towards the end of fourth period today. The break caused a large leak that discharged water from the ceiling, according to Building Services worker Yakubu Agbonselobho. 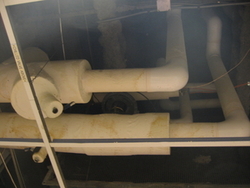 Photo:
The leaking water came down a white pipe in the ceiling above the 340s hallway, said Academy Coordinator Jennifer Kempf, who helped mop up the water after the accident.

"It was pouring," said Magnet computer science teacher MaryAnn Dvorsky. "I was surprised it didn't affect the sprinkler system."

Building services workers subsequently repaired the leak as much as possible and mopped up the water. The 340s hallway was afterwards cordoned off and students had to detour around the hallway because of the wet floor.

Later, three recycling bins were positioned below the ceiling in order to contain the still-dripping water. "Caution — Wet Floor" safety signs and "Hallway closed" signs were placed in the middle of the hallway to warn students. As of the end of the school day today, the hallway remains closed off.