"Brian Banks" is worth the bank

In the wake of the #MeToo movement, Brian Banks tackles a controversial plot based on false sexual assault allegations. In the film, wrongly accused high school football star Brian Banks (Aldis Hodge) faces time in prison, forcing him to lose his career during his physical peak as well as his dreams of going to the National Football League (NFL). 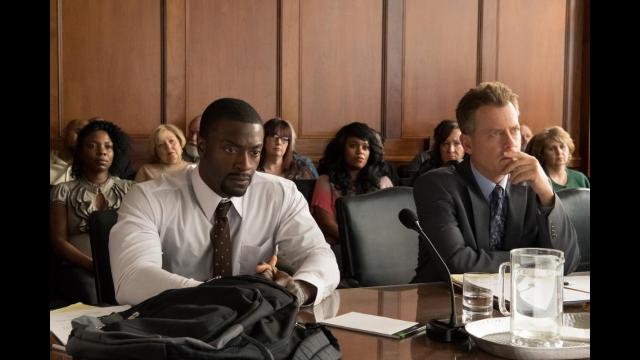 The film's cast is headlined by several popular actors including Morgan Freeman as a prison counselor, Sherri Shepherd as Banks' mother and Greg Kinnear as the leader of the California Innocence Project (CIP), an organization that helps innocent people walk free.

Brian Banks, a dramatized version of the football player's real story, illustrates how a false accusation can ruin a career almost instantly. Banks' fame crashes down when he is arrested based on accusations of kidnapping and raping a classmate. In prison, Banks' prison counselor (Morgan Freeman) turns into an inspirational figure to Banks. Banks is angered by his parole officer's attempt to stop his football career and attempts to regain his freedom with the help of the CIP.

The movie's flashbacks to Banks' high school days contrast his previous happiness to the devastation of being in prison. The production and Hodge's acting blend together beautifully as Banks experiences hallucinations. The film starts with a scene of Banks watching little kids play football at the park, and the ending loops back to that same scene to close the film out smoothly.

Screenwriter Doug Atchison made character development shine throughout the film. The audience watches Banks' parole officer grow to sympathize with Banks after initially having no mercy for him. Banks also grows from a negative, spiteful individual in prison to a positive, persistent one fighting for his freedom.

Brian Banks takes audiences on a rollercoaster ride of emotions. Not only does it keep viewers emotionally invested with characters and plot events, but it also gives an impactful, moving portrayal of a story that is heartbreaking to watch.

The film was released August 9, 2019 and can be viewed at Regal Majestic & IMAX (Silver Spring), Regal Hyattsville Royale, Arclight Bethesda and Regal Gallery Place. The film is rated PG-13 and is based on a true story.

Billy Scott. What's up! My name is Billy Scott, and I am a staff writer for SCO! I am a member of the Dual Enrollment Program, meaning I am in the graduating class of 2021 at both Montgomery College and at Blair. I love rap music, my … More »