The spring pep rally May 4 featured the first powder puff football game in four years. According to SGA sponsor Rondai Ravilious, poor organization and scheduling problems have posed problems for holding the game.

Powder puff used to be an annual custom at Blair, but the game's recent tradition has simply been the event's cancellation. Ravilious said that while in years past, the senior class president organized powder puff, the SGA took a more direct initiative this year through junior Sumih Chi, SGA Historian and Director of School Spirit. 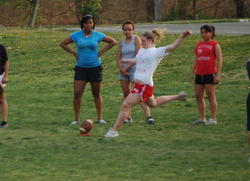 With the help of fellow junior Katie Scott, Chi organized five practices held at Blair for girls interested in playing. The two scheduled practices to begin around 6 p.m., after most sports practices have ended, to allow all interested girls the opportunity to participate. "It's a lot of scheduling stuff to get it on the calendar. I scheduled [practices] around spring sports," Chi said.

Junior and senior girls who wanted to play were strongly encouraged to attend all five practices. Chi said such structure was necessary in order to see how many girls were serious about playing. "I wanted to make a lot of practices so people would actually be committed. It takes a lot for people to actually want to come and support Blair," she said.

The difference between the number of junior girls who signed up to play compared with the number of girls who attended practice was about fifty percent, according to Chi. After two senior girls out of the forty who signed up attended practice, Chi informed the seniors that if they could not field a team, they would not be able to compete. At the next practice, about fifteen senior girls came.

However, Margaret Khan, SGA Director of Community Outreach and organizer of the spring pep rally, offered Chi time during the pep rally to hold the game. The pep rally's outdoor setting provided adequate room for the game.

According to the online Student Activities Resource for Associated Student Body high school activity advisers, powder puff is strictly a two-hand-touch game for girls. The game typically pits seniors against juniors in a battle for schoolyard bragging rights. The gender reversal extends to the boys, who wave pom-poms and root for the girls while wearing cheerleading skirts.

Ravilious views the game as a chance for the student body to unite in good-spirited fun. "I hope it'll become a tradition," she said.


Johanna Gretschel. Johanna Gretschel is pretty much a BEAST at life. Her three most favorite things in the world are: food, hot 80's dance parties and running (probably in that order). She enjoys matching her ribbons with her spandex, and wishes that Madonna (circa 1985) and Gwen … More »