Due to countywide budget cuts, recreational funding has been reduced by more than $2 million for the 2010 fiscal year. As a result, the Blair Sports Academy (BSA) after-school program will see changes in its operation next year, according to Melanie Coffin, manager of recreation for Montgomery County. 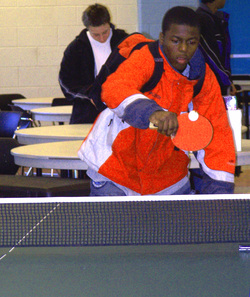 According to Coffin, adjustments made to BSA will include reducing the staff to student ratio to 1:15 and reducing the amount of police presence to one officer for one day per week. Changes in snack incentives and a reduction in activities outside of Blair will mark further differences for BSA.

The Montgomery County Recreation Department (MCRD) is one of many other county agencies being forced to reduce spending. "Due to the changing economy, every department and agency in the county has been asked to make cuts in their budget," Coffin said.

Ninth Grade Administrator Edith Verdejo also acknowledged that the weakened economy has caused a reduction in countywide funding. "From my understanding the County Council cut funding because of hard economic times," she said.

While the specific changes to BSA are still being determined, Coffin related that some favorite activities will be sure to stay next year. "Futsol, our most popular program, will remain for the next school year," she assured. Other activities including daily table tennis tournaments, video game competitions and basketball games will remain in the program as well.

Verdejo appreciated the effort that those involved with BSA put into the program and hopes that its success will not be hindered next year. "I don't think people realize how effective programs like [BSA] are," she said. "They really keep kids out of trouble and give them a wonderful environment to have a good time." There are currently 526 students registered to participate in the program, according to the BSA Web site.

Junior Otis Banwell, a frequent attendee of BSA events, displayed shock and disappointment upon hearing about the reductions. "It's a really fun way to spend my afternoons," he said. "With changes being made to Blair Sports Academy, I personally fear that kids will be less enthusiastic to come and the purpose of it might diminish."

On the other hand, Verdejo is optimistic that changes made to BSA will not have too much of an effect on Blair students. "I don't think Blair Sport Academy [budget cuts] will change the climate of the school but I do know that some kids come to school just for BSA, which is telling of its importance to students," she said.