On Aug. 3, the New York City Landmarks Preservation Commission voted to deny a 19th-century building the historic status it needed to prevent the building from being demolished. As a result, the Cordoba Initiative, a Muslim-led group, will have the opportunity to construct a Muslim community center named Park51 in the building's place. The location of the building is two blocks away from Ground Zero, the site of the World Trade Center attacks. 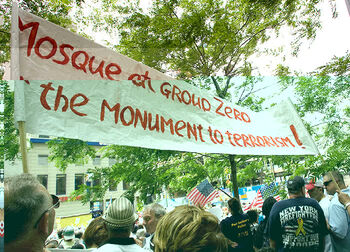 Photo: Protests occur in NYC as the battle of whether to build a mosque near Ground Zero continues.

Photo: Protests occur in NYC as the battle of whether to build a mosque near Ground Zero continues.

Park51 itself will be a community center, with amenities such as an auditorium, a swimming pool and restaurants. But controversy arose after the commission's ruling, due to the fact that Park51 will also contain a mosque, a place of worship that would be open to Muslims throughout the day. Many believe that the idea of building a Muslim symbol just blocks from where the World Trade Center attacks occurred is insensitive and an insult to the victims of 9/11 and their families. However, we should not let the actions of extremists taint our views of Islam as a religion and should work to promote religious freedom throughout the country.

One of the main reasons so many people have vocally opposed the construction of the Muslim community center is quite obvious. They believe that the center would be a shrine of sorts to the very group of people who caused the tragedy that occurred just a block away nine years ago. Many of the families who lost loved ones due to 9/11 believe that the Islamic community center would not promote unity or tolerance, but instead give the extremists a victory.

Several people have spoken out and said that they would rather the Muslim community center be built elsewhere and that they have no opposition to the center, but rather what it stands for. But the real question is: If the community center is prohibited from being built because of religious reasons, will an even bigger victory result for the terrorists?

New York's mayor, Michael Bloomberg, answered that question in an address that followed the ruling. "On [9/11], 3,000 people were killed because some murderous fanatics didn't want us to enjoy the freedoms to profess our own faiths, to speak our own minds, to follow our own dreams and to live our own lives," he said. Bloomberg's speech hits the nail right on the head: We must allow our fellow Americans the freedom to express their religion and respect their wishes to build a community center.

Banning this center from being built would also torch America's reputation as an open-minded country that prides itself on its diverse ethnicity and tolerance for immigrants. The Cordoba Foundation has every right to build an Islamic community center, which will contain facilities that can be used for "inter-community activities," as stated on their Web site.

Moreover, people must realize that Islam is actually a religion of peace. Zead Ramadan, the president of the New York chapter of the Council on American-Islamic Relations, said, "The people here are trying to connect this vile attack on our nation to the religion of Islam, though that exact act stands against everything that Islam stands for."

For many, it is easy to attack the Muslim religion because fundamentalists have formed extremist groups and caused tragedies through their acts of terror; countless people's opinions of Islam and its followers have been swayed due to actions by extremists. But as a country, Americans must remember that religious freedom is the one of the main things that was fought for when this country was established. Refusing this based on the doing of fanatical groups creates an image of intolerance worldwide.

It is inevitable that opponents of the center will continue their battle to cease construction of the site, whether it is because they believe that the Islamic community center glorifies the attacks of 9/11 or because they simply are against the religion of Islam. Nevertheless, in order to win this battle, the United States must prove that we are a unified country that promotes religious freedom to people of all cultures.