The JV field hockey team fell to 2-6 after a loss to the Churchill Bulldogs Tuesday afternoon, surrendering three goals in a rough 3-0 match plagued by unsuccessful offense on the part of the Blazers. The majority of the game was played near Blair's defensive end, as the team was consistently unable to push the ball past the 50-yard line.

The Blazers started off strong, but weak and incomplete passes often caused players to lose control of the ball. In one play early in the game, sophomore co-captain Lauren Rust drove the ball toward Churchill's cage, but tripped while attempting a dodge. Despite her speedy recovery, Rust was unable to reclaim control of the ball. Other falls and missed hits during the course of the game prevented Blair from regaining their offensive power. "People really tried to go for the ball," Rust said. "We fell a lot – but we got up and kept on playing." Head coach Nina Hagan left the game early and was unavailable to comment. 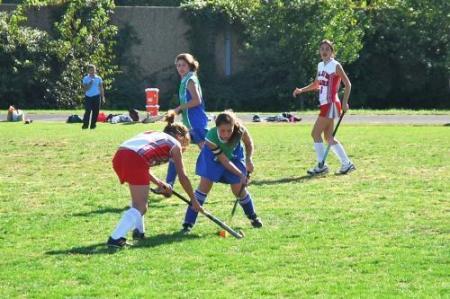 Blair's first major defensive setback came when a corner play forced a group of players to struggle for control of the ball within Blair's shooting circle. Goalkeeper and junior co-captain Annie Buckley kicked the ball away from the cage in an attempt to prevent the Bulldogs from scoring, but a Churchill forward returned the ball with a powerful and clean hit straight into the Blair cage. Churchill added two more goals to seize a 3-0 advantage as they continued to pound the ball through Blair's defense.

Despite this lapse in control, Blair showed impressive defensive strength in the remaining minutes. "The defense did a really good job," Rust said. "They were there to get the ball." Key members of Blair's hardy defense included sophomore Lyla Shapiro and freshman Elizabeth Noxon. Shapiro hustled to meet most Churchill passes, cutting off Churchill attackers and thwarting their attempts to move the ball into Blair's cage. Both players had major roles in Blair's offensive drives, forcing the ball past half field the few times Blair succeeded in penetrating the Bulldog defensive line.

In the rare occasions that the ball came near Churchill's cage, Blazer forwards either lost control of the ball, sending it out of bounds, or the assertive Churchill players interrupted a pass and sent the ball hammering in the opposite direction. "We really had trouble getting past the 50-yard line. We would always lose it right around there," Buckley said. "That really hurts when we can't score."

Although the final score might reflect a defective Blair offense, the team made a valiant effort to push the ball past Bulldog defenders. But due to their inability to permeate Churchill's shooting circle, Blazers were unable to shrink the deficit. "We got it up the field a couple of times and if we would have been there for each other, we could have won," Rust said.

This loss wasn't only triggered by a lack of effective playing; two games this past weekend left the girls exhausted and less energized for their game against the Bulldogs, according to Rust. "Overall, we weren't very pumped this time," she said. "We'll do better in other games."
The Blazers' next home game is against Walter Johnson on Monday, October 13 at 5 p.m.