Boys' basketball unable to make up for scoreless second quarter

The boys' varsity basketball team (3-2) fell victim to Churchill's deadly shooting Friday night, as they dropped their second game in a row, 44-29. Blair struggled offensively all night, and a 16-0 Churchill run in the second quarter made it too difficult for the Blazers to make a comeback in the second half.

The Blazers had no difficulty scoring early on, jumping out to a quick 14-8 first quarter lead, but suddenly fell apart in the following quarter. "We had a great start to the game," head coach Mark DeStefano said. "We forgot to play team offense in the second quarter though." 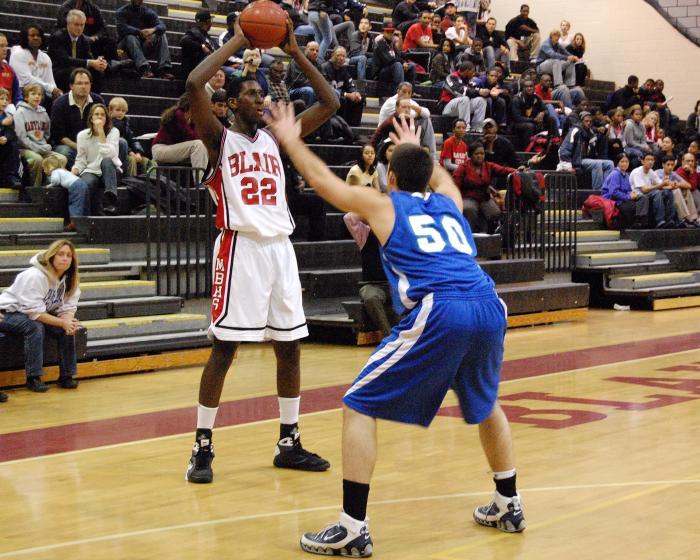 Photo: Senior Leon Sampson looks for support from his teammates as the Blazers move to shoot.

Photo: Senior Leon Sampson looks for support from his teammates as the Blazers move to shoot.

Churchill (3-2) was able to get a series of strong shots, including multiple three-pointers, to quickly erase Blair's lead and build their own. The Blazers, on the other hand, mustered poor shots and were unable to convert from the free throw line. Free throw attempts from senior co-captain and forward Mike McClain, junior guard Cameron Reed and senior captain and guard Eddie Kolleh all rimmed out, and Blair was unable get a ball in the net for the duration of the quarter. The Bulldogs scored unanswered 16 points, giving them a 24-14 advantage.

Senior co-captain and guard Wayne Henderson attributed Blair's shortfall to lack of offense cohesion and communication. "We couldn't run the offense so we didn't score," he said simply.

DeStefano agreed, adding that there were problems with defense as well. "We just were not executing half court defense," he said of the second quarter.

However, after two comebacks in their first three games, the Blazers found themselves unable to make up for lost points. While matching the Bulldogs almost point for point, Blair could not string together a run. The Blazers' press fell apart after the first quarter as they had difficulty forcing turnovers, but their defense played intensely overall, especially in the third quarter. 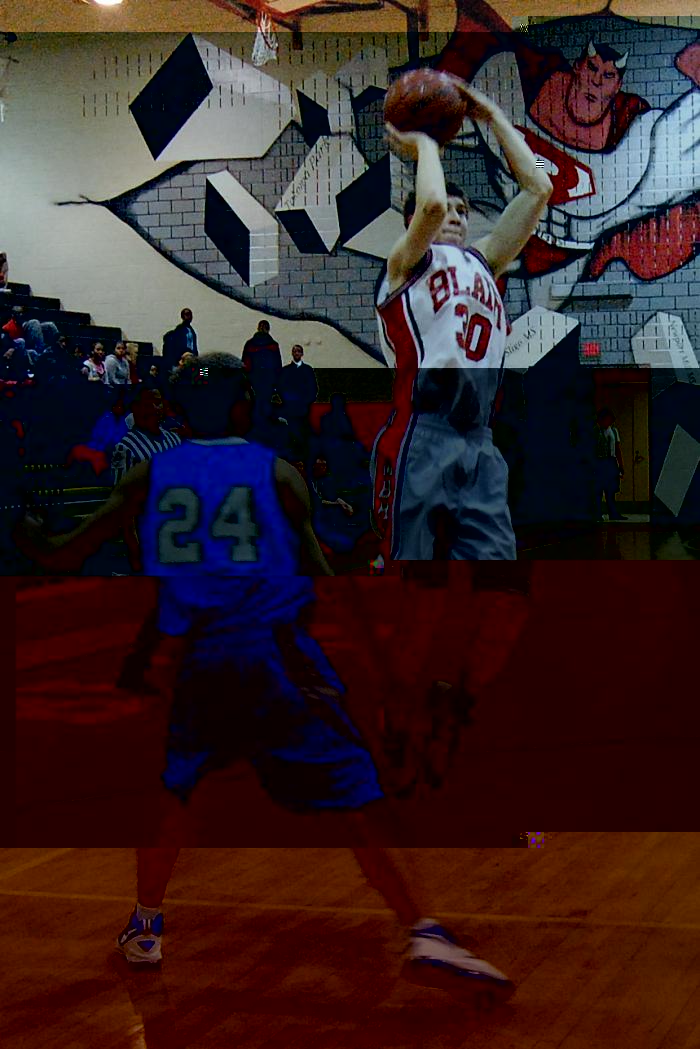 Photo: Early in the first quarter, sophomore Josh Kickenson puts the ball in the basket for the Blazers.

Photo: Early in the first quarter, sophomore Josh Kickenson puts the ball in the basket for the Blazers.

The opening moments of the game proved to be Blair's best. The home team held a six-point lead for more than half of the first quarter, capitalizing on quick transitions to score. On one such play, McClain took the ball down court, made a quick pass to Kolleh, then received it back for a powerful lay up and a 12-6 lead. Senior co-captain and center Leon Sampson used his towering height to block shots and instill initial dominance for Blair.

Despite the loss, DeStefano was able to see the positives of the game. "I wouldn't say the play was weak," he said. "Our defense kept a strong team under 50 points." Looking to their next game, DeStefano hopes that this game taught his team to play smart throughout the game. "The physical play was hard tonight," he said. "But we still need to play tougher both mentally and physically."

Blair's next home game is Wednesday, Jan. 7 against Blake at 5:15 p.m.
Editor's note: Mark DeStefano is the adviser for Silver Chips Online.