Buses seem overcrowded, but there are solutions

If you’re left standing on the bus, don’t complain about it every day: do something

At the start of a school year, there are a million things Blazers anticipate, likely including classes, teachers, the new one lunch, or homework. But for some it’s high capacity buses that are at the top of their list of things to worry about.

The term overcrowded gets thrown around a lot among students riding full buses. Yet, most of these buses are not overcrowded, they are simply at capacity. In the case that there is an overcrowded bus, there is usually a logical reason for the issue and some potential solutions.

The first reason is the overwhelming personal choice students have when picking the bus that they will be riding. Jammie Chessley, Assistant Senior Router and Magnet Coordinator of the Montgomery County Public Schools (MCPS) Department of Transportation (DoT), explained that zoning to a specific bus stop has been removed making it difficult to estimate load counts. “Years ago, we used to assign students to the closest stops and we would send letters out, but the parents would call us and say ‘No, we want this stop’ or ‘we want the stop closest to the library.’ So now, we let them choose,” Chessley said.

As a result, the DoT does not know anything about overcrowding, until they receive feedback from drivers, schools, or parents. When Chessley receives such a notification, she takes a close look at the route to resolve the issues. “They will send me an email or call to say we’ve got an overload on this route, this school, and then I collect all the manifest for the particular school. And I will review them and make changes from there,” Chessley said.

Bus drivers provide load counts to the DoT in September and January. However, a variety of factors can make these counts inaccurate. Blazers could be going to a friend’s house, taking a sick day from school, riding home with their parents, or simply staying after school. For buses which are almost at capacity, these daily personal choices may fluctuate bus counts above maximum load capacity. 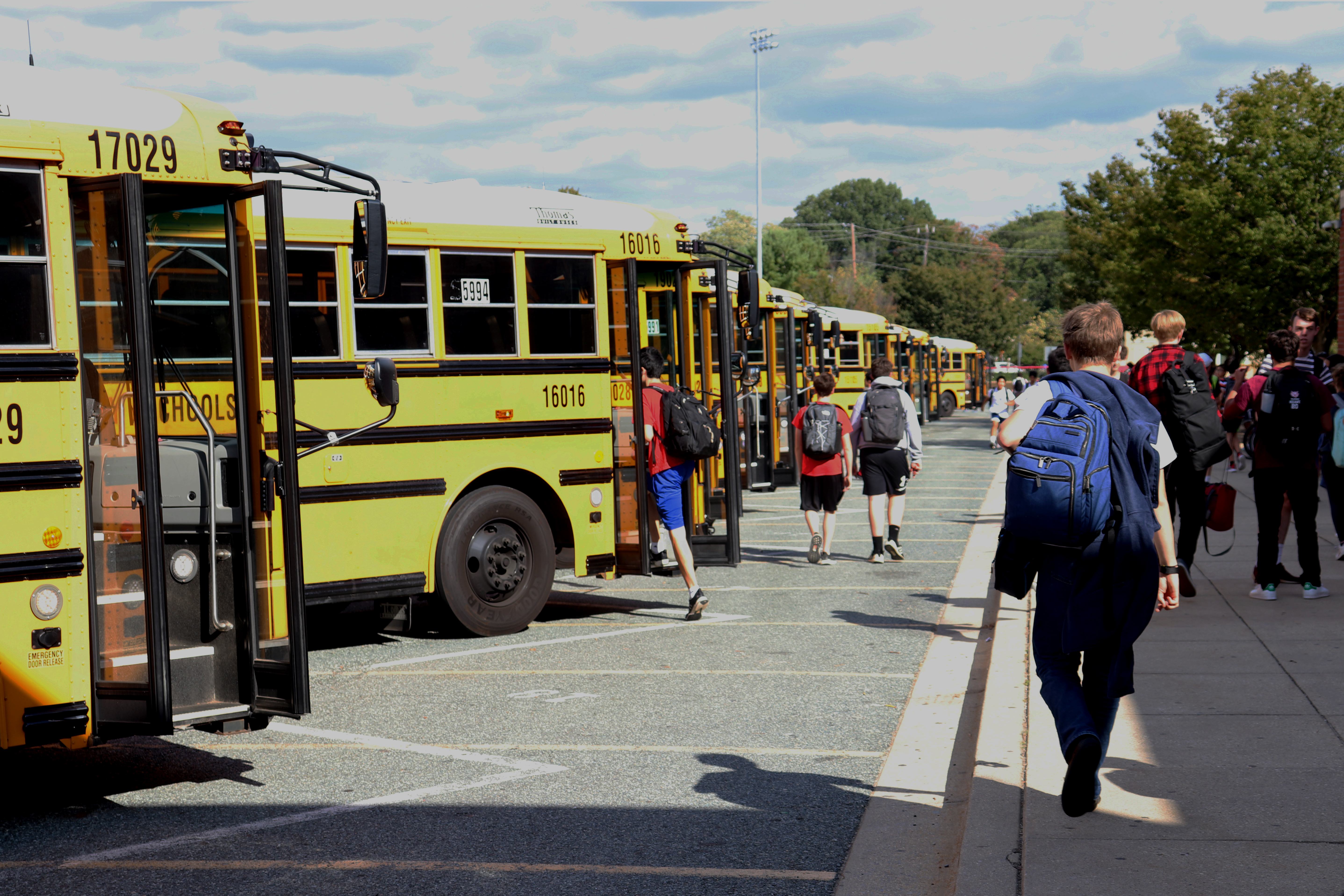 Photo: Students take buses every day, dreading days when their buses are filled to capacity (courtesy of Catherine Lo).

Photo: Students take buses every day, dreading days when their buses are filled to capacity (courtesy of Catherine Lo).

Another consequence of students choosing their own buses is visible when there are two buses going to the same stops. 4994 and 4991, which both stop at Stone Mill Elementary School (SMES) and the Glen Club on Cavanaugh Drive, are prime examples of this issue. 4994 is the earlier bus, thus it is empty. On the other hand, the 10-minute-later departure of 4991 leaves it jam-packed. 4991 shoulders kids who want to sleep in or miss the bus, a number far greater than those who find it easy to leave their house 10 minutes earlier.

The same issue takes place in the afternoon. SMES is a designated stop on two buses, 5991 and 4991, due to the high population of students that live in that region. 5991 is overcrowded, while 4991 has plenty of seats left open. Once again, the reason is that 4991 reaches SMES 20 minutes later because of additional stops. Students want to get home as fast as possible and avoid any extension to the long ride.

Mondays and Fridays (as well as school delays and early releases) are the most crowded days on the bus. This is due to yet another factor of student choice: activity buses. Blazers staying after school for extracurricular activities solve overcrowding because students are then sent home in two waves.

In certain cases, Blazer concerns are justified. Certain buses are crowded to the point that there may be some students standing. In this situation, complaining to your friends daily or boasting that you were the brave soul who stood during the bus ride will not change the situation. Instead, call the MCPS DoT; their jobs include helping with transportation issues and they are exceedingly supportive.

Some are curious as to why the bus drivers do not resolve the issue of kids standing on the bus, but the answer is simple. When faced with two choices - kicking you off the bus or quietly allowing you to get home - drivers often pick the latter, which students no doubt appreciate.

Senior Jennifer Ren talks about the struggle to find a seat on the bus. “When it’s straight-up way too crowded, the bus ride becomes unbearable and it’s almost like a really difficult roller coaster ride. With each turn you need to make sure that you don’t fall out of your seat,” Ren said.

The new bus design exacerbates the issue of students having to brace themselves when sitting on the outsides of bus seats. The previous two-seater and three-seater have been replaced with what students have deemed “2.5 seaters.” The bus has an increased capacity, but seats are smaller for students - who are already bracing themselves with their hands and inner core strength - to sit comfortably in their seats.

However, Ren also recognized that the problems within buses have to do with students. Musical instruments, jackets, and backpacks take up a handful of space. There are also always those kids who pretend to be asleep or just blatantly say no when you request to sit with them, just to avoid sharing a seat. This leads to buses which are not overcrowded to seem as though they are.

Buses are not meant to be a form of first-class travel. They serve a concrete purpose: transporting students to and from school. As long as there is a seat for every student, the bus serves the purpose. There are only so many resources in the county, so you getting your own seat is sadly not the priority. This, as well as getting a luxurious sleep or having the space to do homework, is simply not the intent.

Yes some buses are crowded. Be that as it may, to say that they are overcrowded is usually a stretch. Pick up the phone and call the DoT if you feel your bus actually has an issue; if the concern is valid, change will come.