Campaign and glory for youth volunteers

It takes a lot to stir a generation. It happened during the 1960s with the Vietnam War, it happened during the 1970s with ratification of the 26th Amendment - guaranteeing citizens 18 and over the right to vote - and right now it is happening again with the 2008 presidential election. While the jury is still out on whether this current election will reach the record youth voter turnout of 50.3 percent for the 1972 election between Richard Nixon and George McGovern, 2008 is proving to be a contender for youth political involvement.

From YouTube and text messaging to Facebook and MySpace, political candidates are reaching out to young voters in new, innovative ways. Of the 44 million eligible youth voters, ages 18 to 29, who comprise approximately 20 percent of the electorate, many are responding to these new methods with vigor and enthusiasm. Whether through volunteering for a particular campaign or turning out at the voting booth, the Millennial Generation or Generation Y (those born between 1985 and 2005) is hitting record levels for election participation. 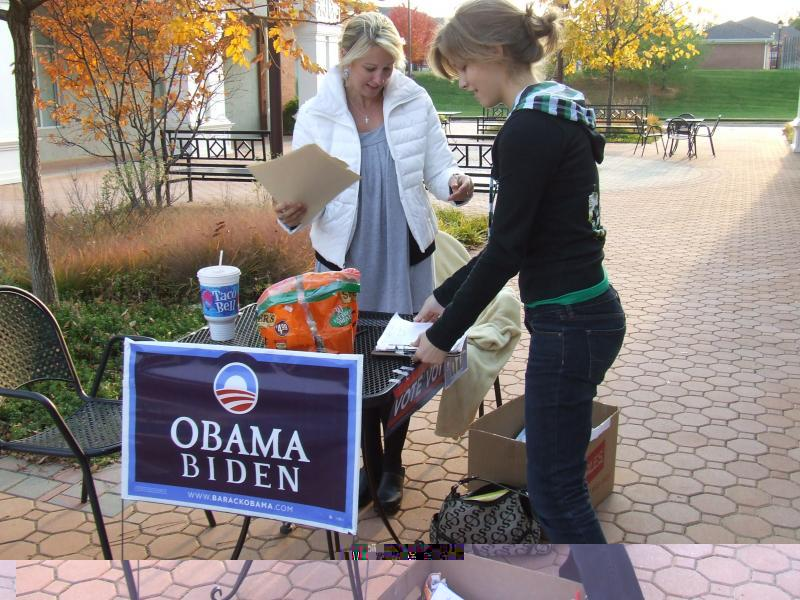 Volunteers on the rise

Throughout Montgomery County, both the Young Republicans and the Young Democrats have seen increases in the number of youth volunteers that are coming out to support their respective candidate. "There has been a definite rise in the amount of volunteers we are receiving," Tim Hwang, Mid-Atlantic Deputy Director for the Young Democrats and a junior at Wootton High School, says. "Students are actually paying attention to issues and then trying to make an impact."

On the Republican side, youth volunteers are coming out in record numbers due to better organization and communication than in years past, according to Moshe Starkman, President of the Montgomery County Young Republicans. "We have been overwhelmed by volunteers," Starkman notes, "but [youth voters] are reluctant to publicly identify themselves as Republicans."

To respond to this increase, the Young Republicans opened a Facebook-like networking site on Sept. 1, 2008 called the YRNetwork. Over 217 under-30 Maryland residents have subscribed to the site; the network boasts a 1,000-plus nation-wide membership. "It is quickly growing and becoming a meeting ground for young Republicans across the nation," Starkman says.

Both leaders, despite their different political views, began to volunteer their time recruiting and organizing young politicos for similar reasons. "Through politics you can help more people on a wider range of issues," Hwang says.

Based on past experience, both parties have found that the most effective way to motivate the constituents is face-to-face campaigning. Responding to increased youth interest, both Starkman and Hwang have helped to organize canvassing trips to key battleground states. Using a force of entirely high school students, Students for Barack Obama has visited over 11,000 houses in the Richmond area in a push to sway the Virginia vote.

Locally, young people have been particularly drawn to the Democratic Party as of late - approximately 50 percent support Democrats compared to approximately 30 percent who support Republicans while the remaining 20 percent stay uncommitted - according to Stephanie Young of Rock the Vote, a national "Get Out The Vote" organization.

In response to this revived interest in politics, candidates have started to create youth sectors of their campaigns, tapping into "New Media" as a way to attract volunteers and supporters. New Media, which is any interactive media such as the Internet and cell phone technology, has allowed candidates to connect to the Millennial Generation through methods popular among youth. Whether by getting friended by Obama on Facebook or by receiving a YouTube video from McCain, young voters are getting more in touch with candidates who have begun to "lean on the youth to volunteer and vote," according to Young.

Taking it to the ballot box

Voting is exactly what the Millennial Generation plans on doing. Whether it is the historic nomination of a minority candidate to a major party ticket or an economic meltdown that threatens all sectors of American life, young voters are invigorated by the political climate with fervor comparable to the 1972 election. Since 1972's record participation of over 50 percent, it has then decreased every year except for a slight peak in 1992. In 2004 the youth voter turnout began to return to 1972 levels as it crept up to 47.7 percent. 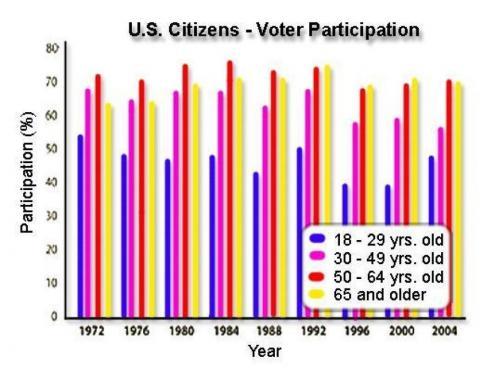 The 2008 election could prove to be the record-holder as youth voter turnout hit unprecedented levels in every primary and caucus this election cycle. In 2004 Rock the Vote registered over 1.4 million young voters. The number was nearly doubled this year with over 2.5 million young voters registered. While national totals have yet to be tabulated for the amount of registered youth voters and for voter turnout among youth, groups such as The Center for Information & Research on Civic Learning and Engagement (CIRCLE) are predicting historic results.

These Millennial Generation voters are being driven to the political scene by high college tuition, a weakening economy, fewer job opportunities, the wars in Iraq and Afghanistan and the rising cost of health care. "We have seen all these world problems," Young says, "and now we see the repercussions of our actions of sitting back and not voting."

Jonathan Huitz, a Blair senior who registered to vote in September, has a strong connection to the issues. With three brothers currently serving overseas, the Iraq war is an important issue for him; he plans to vote for his first time this election. "I want to get my brothers, and the rest of the troops, home," Huitz says.

With the election still running, the youth constituency has yet to prove the impact of their votes, but through canvassing and campaigning alone, the Millennial Generation has already begun to make an impact on the political climate, an impact that many feel will continue to increase over the coming years. "The 2008 youth turnout is not and will not be a fluke," Young says. "This generation sees that voting is important and will continue to do so in the elections to come."

Lucas Alvarado-Farrar. Lucas is half Honduran and half American, but all Mexican. He is a New York native and naturally a fan of the Bronx Bombers. Lucas is a senior in CAP, plays soccer and runs track, and likes pretty much any sports activity. He is fond ... More »