Brandman announces run for Board of Education At-Large

Shirley Brandman, a candidate for Montgomery County Board of Education At-Large, formally launched her campaign on March 4 from 3 to 5 p.m. at the Gwendolyn Coffield Community Center in Silver Spring. Officials including County Councilman Steve Silverman, State Delegate Jane Lawton and friends in support of Brandman gathered to celebrate her candidacy.

Chris Barclay, a parent who said that he supports Brandman for her "positive solutions that would make a difference for children," officially introduced the event. After Barclay's introduction, Brandman spoke to the crowd, detailing her experiences as an attorney advocating for children, a special education teacher and as the daughter of immigrants. 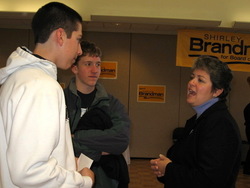 Brandman explained that her goals and ambitions as a prospective Board of Education (BOE) member are to reach out to the community, acknowledge the needs of all students and place a greater emphasis on quality teaching, rather than standardized testing. Brandman asserted that currently the county is not addressing the needs of all minority and ESOL students.

Brandman also said that the BOE needs to examine effective means of increasing the rate of academic achievement in minorities by analyzing the issue in communities throughout the county. "[We need to] be more open to asking each local school community what they need to close the achievement gap," said Brandman.

In order for Brandman to know what is important to parents and students concerning education, sheets with lists of issues were posted on one of the walls of the room. Here people could place four blue dots under those that were most important to them. One issue that had many dots under it read, "Too much time devoted to teaching to the 'test' for standardized testing." Another dealt with overcrowded classes and a third addressed curricula.