Two classes take an early lead, others look to catch up

'Tis the season to be giving — at least that's the basis for this year's SGA-sponsored canned food drive. But with the drive coming to a close, Blair classes have their eyes on the ball — er, breakfast party — offered to the winning class. 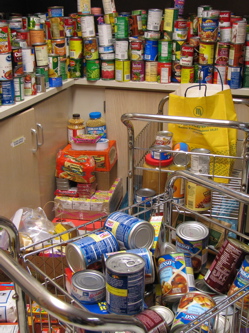 Photo: The cans and non-perishable food items pile up in the SGA office as the annual canned food drive continues at Blair.

Photo: The cans and non-perishable food items pile up in the SGA office as the annual canned food drive continues at Blair.

To get students more involved this year, the SGA is giving license to wear a hat every Friday if the student brings in four or more cans. This "hat pass," breakfast party and good feeling that comes from giving are inspiring classes to bring in cans until the drive rounds out next week. The current total for the whole school is 1072 cans, with the SGA's next collection date is Monday Nov. 20.

As usual, some of the magnet classes have secured early leads, according to Terence McPherson, SGA's director of student advocacy. "I think that the magnets have a really competitive spirit, and we really enjoy that," McPherson says. But some other classes that haven't been big players in the past also have their eye on a win.

Missing notables
Dennis Heidler: The teacher of last year's winning class, Heidler's new position as the magnet coordinator has left him without second period class to participate in the canned food drive. But no avail; in the spirit of competition, Heidler has chosen to sponsor a class this year — Lola Piper's Fundamentals of computer science class. "I pester them on a daily basis," Heidler says. "I occasionally bring in cans to remind them." Heidler believes that his new tradition of "adopting" classes will continue in the future — "because I'm very competitive and I like to win," he says.

Eric Walstein: Magnet math teacher Walstein is another traditionally tough competitor without a second period class this year. Last year, Walstein's class came in second to Heidler's class by a margin of about 600 cans. The donations collected by those two classes accounted for over 96 percent of the 2456 cans collected. Walstein plans to rejoin the competition in full swing in coming years if he has a class in the "can collecting" period.

Top Guns
Analysis of algorithms, taught by Maryann Dvorsky: Currently, this class of juniors is in the lead with over 198 cans to their name. Dvorsky credits the students in the class for the high number of cans that have been brought in so far. "I haven't prodded them about it," she says. "I mentioned it in the beginning, but it has taken a life of its own."

Fundamentals of computer science, taught by Lola Piper: This second period class is the one Heidler has chosen to adopt and encourage for the drive. Between the 23 students in the class, Piper estimates that 60 to 70 percent have contributed to the 137 plus cans collected thus far. To motivate the students further, Piper has integrated "can collecting" into her lesson plans with the computer program STELLA. Piper is optimistic about the class's future, but also says that she is happy about the students' efforts. "I'm proud of them," she says. "I think it's really cool."

Underdogs
Basketball, taught by Emmanuel Charles: As one of the newcomers on the can-collecting scene, this basketball class's prospects for the next week are looking bright. The large class of nearly 40 students has brought in around 76 cans so far. To motivate students to bring in cans, Charles has been offering the incentive of cutting down on fitness laps when canned goods are brought in. "Each day, we run laps," he says. "Ever time they bring in some cans, I cut down on fitness." Charles is not fazed by the stiff competition he will be facing, and says, "If my class decides to do it, we'll do it!"

Honors chambers singing, taught by Paul Newport: Newport's chambers class rounds out the top four can-collecting classes. So far, this group has brought in 60 cans, a relatively small number compared to the triple digits that have been collected by fellow second period classes. But Newport still believes that his class has a good chance at winning the drive. "That'll be a stretch, but I think we can do it," he says.