D'Angelo leaving after 15 years of commitment

Blair's Communication Arts Program (CAP) Coordinator, Dolores D'Angelo announced she is retiring at the end of the 2006-2007 school year after 15 years of working at Blair. The announcement was made in a letter sent out to all CAP students May 19.

CAP teacher John Goldman will take over as Acting Coordinator from July 1 until the first day of school in August. Goldman is also being considered as D'Angelo's permanent replacement. "Ultimately the new principal will make the decision, but mostly likely it will be Mr. Goldman," D'Angelo said. 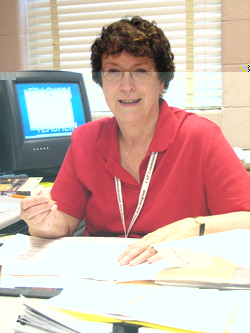 Photo: Dr. D'Angelo grades papers at her desk in the CAP office.

Photo: Dr. D'Angelo grades papers at her desk in the CAP office.

D'Angelo began contemplating her retirement before spring break after her husband was offered a job opportunity in Connecticut. Though she and her husband are unsure as to whether or not he will act on the opportunity, D'Angelo decided to retire to pursue her own career possibilities. "I am not retiring from teaching, I am just ready for a new phase of my career," she said. "I may be teaching at a university." At this point the couple's plans are tentative.

Though D'Angelo's retirement comes relatively suddenly, her decision to offer Goldman her position is not. "Over the past year or two I have been thinking what would happen if I left. I cannot be the sole keeper of the keys and lock up all the secrets," she said. "Mr. Goldman has the experience."

Goldman has taught at Blair as a part of the Communication Arts Program for 9 years. He has taught an assortment of classes, including a tenth grade media class, an eleventh grade portfolio class that has CAP students putting together their final portfolio and a twelfth grade continuation of the portfolio class.

Goldman is currently shadowing D'Angelo and learning all the requirements of his job. "It would be different if he was completely new to the job like I was," D'Angelo said. "Mr. Goldman already knows the staff and who to use to make interdisciplinary connections for the program."

Goldman said he is excited about the future. "I was happy to accept the offer as Acting Coordinator of CAP because I feel passionate about the program," he said. "I am excited about the opportunity to ensure generations of CAP scholars will receive a quality education."

While Goldman is excited about his new job, he will miss D'Angelo's guidance and input. "It is a bittersweet experience to lose a close friend and mentor, and be offered such a great opportunity," he said.

Even in her retirement, D'Angelo said she wants to help her students succeed with college. "I will do anything I can do before June 18 to help. I am happy to do Trailblazer recommendations, (required for counselors to write college recommendations) and anything that's one page, one time." However she will not be writing college recommendations because communication between her and the students while she is no longer in the school will be an issue. "I do not know where I will be and sending papers back and forth is hard. I do not think it would be fair for students," D'Angelo said.

Prior to her 15 years as CAP Coordinator, D'Angelo taught tenth grade English at Blair in the 1970s for three years. After a taking a year off after her daughter was born in 1976, D'Angelo moved to Atlanta where she taught night school at an alternative high school for two years. D'Angelo returned to Maryland where she earned her PhD from the University of Maryland College Park (UMCP) in 1987 and worked as a substitute teacher at Blair. She then taught advanced composition, freshman composition, composition for pre-law and graphics and design at UMCP for five years. In 1992 she returned to Blair after hearing about the open CAP Coordinator position and also taught eleventh grade AP Language and Composition.