Capitol Steps to perform again for After Prom fundraiser

The political satire group Capitol Steps will perform at the Montgomery Blair High School (MBHS) auditorium on Oct. 8 at 7:30 p.m. in order to raise funds for After Prom. This will be the group's second time performing at MBHS; its first time was last March. 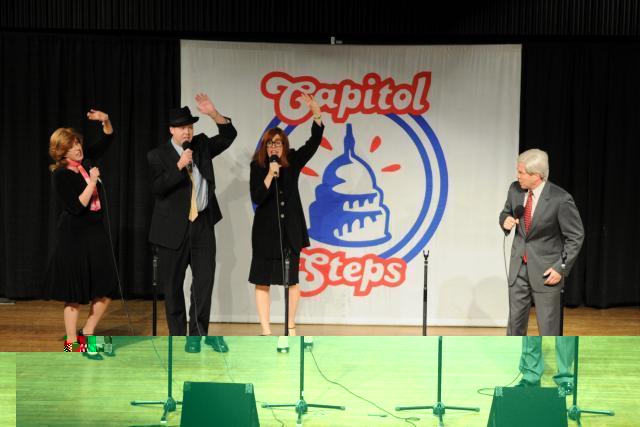 Photo: Capitol Steps originated in 1981 as entertainment for a Congress Christmas party and now tours nationwide.

Photo: Capitol Steps originated in 1981 as entertainment for a Congress Christmas party and now tours nationwide.

Capitol Steps consists of performers, some of whom are Senate staff, who create skits and songs that mock historic and current political events. The act originated in Washington D.C. and now performs all around the country.

The idea to have Capitol Steps perform at MBHS originated last year, when the Budget Chair for After Prom, Conny Mayer, was having trouble collecting funds for the event. Mayer and other parents helping out with After Prom planning came up with fundraising ideas, one of which was to have Capitol Steps perform. "I was responsible for the 2011 After Prom budget and had a lot of trouble raising money. When I said I'd do it again for 2012 prom, parents started sending me ideas about how to raise money. One idea sent by [Second Vice President of Academic Achievement Lisa Gabriel] was to host Capitol Steps," Mayer said.

The decision to have the show in the fall as opposed to the spring like last year was based on the upcoming election. "We think it might work in the fall because it is an election year and even more people than usual might be interested in a political satire show," Mayer said. Junior Emma Strongin agreed that having the show now is a good idea. "I think it's better in the fall this year because the elections are coming like now," Strongin said.

Mayer explained that the decision to have Capitol Steps perform again this year was because of the great outcome last year's performance received. If all tickets are sold this year, it will raise a vast amount of money for After Prom, as it did last year. "The show for 2012 [After] Prom sold out and was a huge success, which is why we're trying it again. If the show sells out we can raise about three quarters of the After Prom's budget," Mayer said.

The Capitol Steps performance is expected to have a few old acts but consist mostly of new skits and songs in their upcoming show. "We think there will be some old content because those issues stay with it, but other content we expect to be new," Mayer said.

Junior Aviva Blonder believes that some people who attended Capitol Steps last year would see the show again, but cannot due to the inconvenience of this year's performance date. "Fall is busier [and it is] not as easy to fit it in," Blonder said. Strongin doesn't think the date will be an issue. "I don't think the season has anything to do with how busy people are," Strongin said.

Tickets are available online and at the Attendance Office for $30 or at the door for $40.