Catch me if you camera: a secure solution for Blair's hallways

There's always a heart-stopping moment when a student looses a cell phone. He frantically opens his locker, searches his bag and reaches into his pockets and realizes that his phone is gone for good. He spends the rest of the day imagining places where he could have lost the phone, and how he could get it back. Until recently there was nothing a student could do if someone took his phone, but now there is a greater chance that he will regain his property. 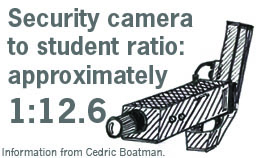 Photo:
Over the summer, MCPS paid nearly $200,000 to install 88 new security cameras at Blair. Blair also has a new system for viewing the footage received by the new cameras. This system gives security guards the ability and tools they need to protect the school better and to catch vandals and thieves at Blair.

With all the benefits the new system provides, and the proportionately low cost, the cameras were a smart decision. In the days of the old system, the cameras were on all the time, everyday. According to Wayne Ferrell, field security coordinator for the Blair, Einstein, Northwood and Kennedy cluster, with the new security upgrade, the cameras only turn on when they detect movement, but "sleep" when they haven't detected motion for some time. This means they won't be using electricity and energy at night and on the weekends. Also, security does not have to watch all the tapes from every camera when an incident has occurred at Blair. If a camera senses activity at an unusual time (late at night or on the weekends), a flashing red bar appears next to the monitor of the camera that sensed the movement. Security guards can go directly to the flagged monitor and rewind the footage until they see exactly what happened.

These cameras will do more than just catch intruders on tape. Ferrell explained that because of the new digital system, police officers will be able to see the incident recorded by the cameras while they are at the station or on the road. Officers will have access to a Web site that records the footage the cameras pick up. The police will know exactly where a trespasser is in the building, and exactly what he or she is doing.

Even though the cameras are a step forward for Blair security, some fear the cameras will overstep their boundaries and invade students' privacy. But MCPS's security camera regulations ensure that students' privacy is respected. Cedric Boatman, the security team leader at Blair, said it's against county rules to install cameras in bathrooms, classrooms or any "private areas."

Furthermore, there will not be a security guard constantly monitoring the footage. The new system is digital, meaning that all of the footage from the cameras is downloaded straight to a Web site that records the data. There is no one sitting watching a screen all day. Security officers would only watch the footage if someone comes to them with a concern or if the unusual motion is detected by that camera.

Apart from concerns about invasion of privacy, some students are also worried that the funds for the cameras were misspent. Junior Matthew Love said that MCPS seems to be wasting money that would have been better spent in other places.

But fortunately, the cameras were not installed at the expense of any other budgetary needs. The county has two budgets: the capital and the operating budget. The operating budget funds textbooks, supplies and teacher salaries. The capital budget funds all major building improvement projects. The new security system came out of the capital budget. In the time since the county paid for the cameras, it has provided Blair with funds for a new running track and new tennis courts. The county has also funded the installation of stairs down to the sports fields and funded the repair of a leak in the greenhouse.

When a Blazer feels the empty space where his phone should be, he will now know that the security cameras were money well spent. Blazers can be confident that Blair security will catch the thief and return what is rightfully ours.