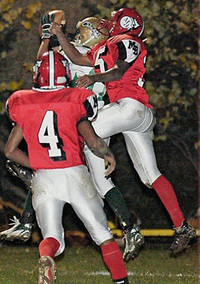 Photo: Even under double coverage, Kennedy receiver Abreham Scott was able to track down Melvin Harris' pass for Kennedy's second score of the game early in the first quarter.

Photo: Even under double coverage, Kennedy receiver Abreham Scott was able to track down Melvin Harris' pass for Kennedy's second score of the game early in the first quarter.

For those who hadn't predicted it already, no, the Blair varsity football squad is not going to the playoffs. Tonight, despite the return of senior Ross Williams, the Blazers dropped their seventh straight game, losing to the Kennedy Cavaliers, 0-35.

Head Coach Seals skipped the post-game speech and instead told his players to hit the showers. "Nothing to be said that I haven't already said about this team," he said. "We just need to wake up and play some football."

The opening drive for the Cavaliers set the pace for the entire game. On the second play, Kennedy's Phillis Shaw, after a pump fake from quarterback Melvin Harris, was pitched the ball. Shaw ran 65 yards, breaking three tackles and avoiding two more Blazers, for a touchdown with 11:24 left in the first quarter. The Cavaliers tried for two more points but were unsuccessful, leaving Blair behind 0-6.

The Blazers, on their first possession, suffered two sacks and punted the ball a total of 15 yards, allowing the Cavaliers to score in under three minutes on the clock with a 16-yard pass from Harris to wide receiver Abreham Scott with 8:45 left on the clock. The Blazers trailed 0-12.

Kennedy scored again in the first quarter with a successful campaign through the air. With four yards between the ball and the Blair end zone and 1:25 left on the clock, Harris snapped the ball, found no one on his right side to throw to so improvised and rolled left, finding Shaw in the end zone. The cavaliers converted for two more points, further widening the gap between them and the Blazers. The score was 0-20.

The second quarter yielded a more efficient Blazer defense that only allowed eight points. With 10:24 on the clock, the Cavaliers again found themselves in scoring position. Harris dropped back to pass, threw and was intercepted by junior Haben Ghebremeschel.

Despite improved defensive efforts, Kennedy ended the half with its fourth touchdown of the night. Harris proved he didn't need his arm to score, instead relying on his legs with a quarterback draw. With :15 left in the half, the Cavaliers had widened the already insurmountable gap to 28 points.

The second half saw one more Kennedy touchdown and, to no one's surprise, no Blair offensive action.

The team, Seals stated, was discouraged. Their shot at a playoff berth or even a .500 season dashed, there was no reason for them to even try. "They got nothing to play for," he said. "And they know it."

The Blazers' next game is Friday, October 27 at Einstein.