Celebrating cravings and culture: meals that bring us together

What Blazers are eating during this holiday season

It's the holiday season, a time of coming together with friends and family to embrace culture and tradition. What’s one way people love to come together? Food, of course! We can all share meals and eat together at the dinner table. From Hanukkah to Kwanzaa to Christmas, each holiday is exceptionally unique and special during this winter season. 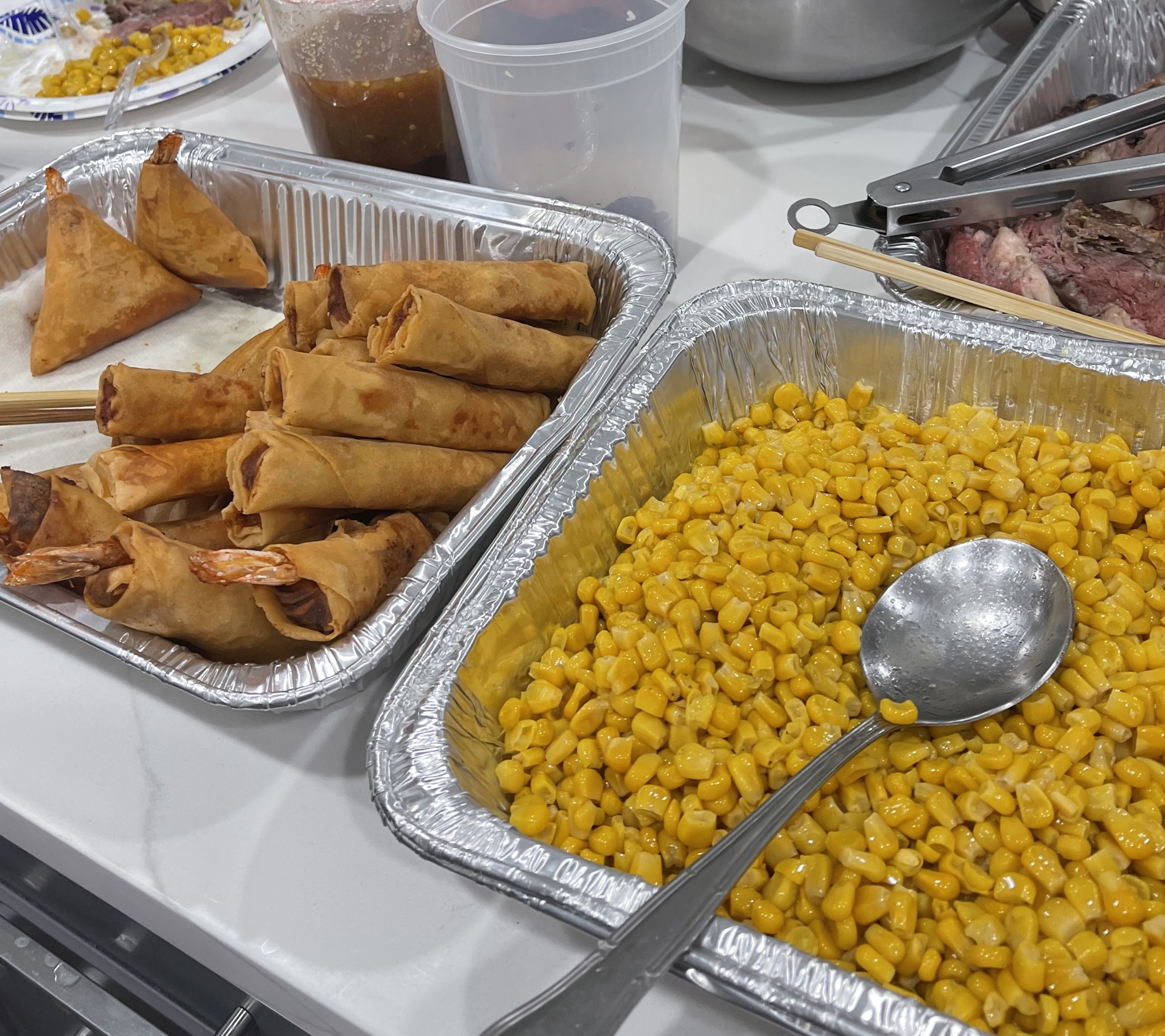 Photo: Egg rolls and corn are displayed to be shared amongst the table.

Egg rolls and corn are displayed to be shared amongst the table. Photo courtesy of Katie Phung.

Hanukkah occurs for eight days every November or December. During these eight days, Jewish people light a menorah and enjoy a wide range of delicious Kosher dishes.

Junior Nathan Gehl emphasizes that fried dishes are typically more significant than other dishes eaten during Hanukkah. “We always eat a lot of fried foods, because it ties back to the story of Hanukkah, where the oil lasted for eight days instead of one. So foods like doughnuts and latkes are the most popular things eaten during the eight days,” Gehl says.

Sweet potato pancakes made from shallow-fried shredded or mashed potatoes. Other than potatoes, latkes can also be made with cheese, onion, and zucchini. They are known as one of the most popular side dishes eaten during Hanukkah.

A traditional egg noodle casserole served as a side-dish. Ingredients for this dish can be swapped from sweet (sugar and cinnamon) to savory (vegetables and spices).

A deep-fried yeast dough filled with jam that is sprinkled with powdered sugar. This sweet dessert is usually described as a crossover of a beignet and a jelly doughnut. Fillings for this treat can vary from strawberry jam to blueberry jam, pumpkin cream, lime curd or chocolate custard.

A very popular dessert in Jewish culture is Hanukkah gelt, also known as chocolate coins. Traditionally, Hanukkah gelt is money given as a gift during the holiday; but in recent years, it has taken the form of a chocolate coin wrapped in gold foil. Jewish people use gelt as a prize for winning Dreidel, a traditional Hanukkah game that involves a four-sided spinning top. 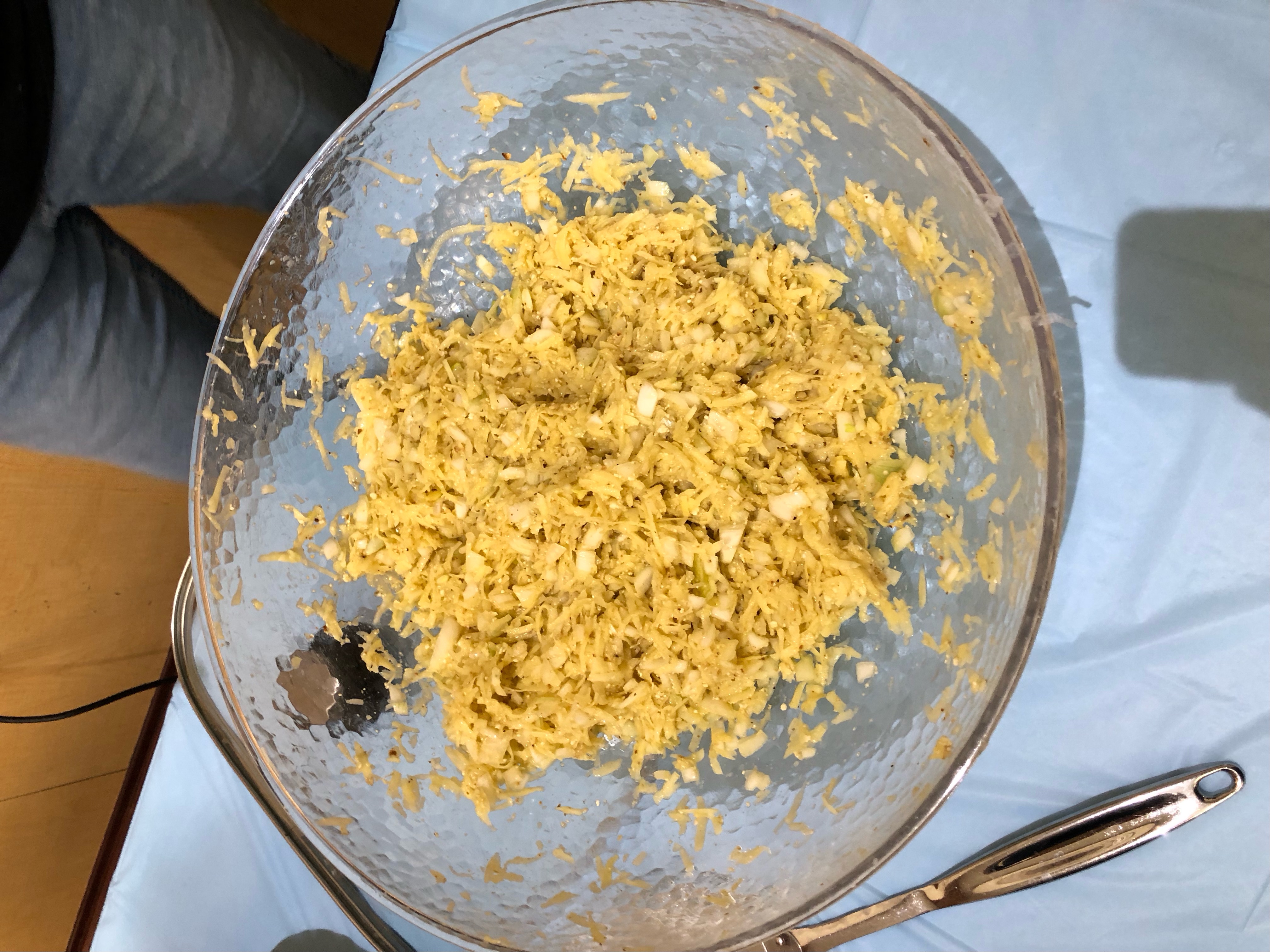 Kwanzaa, which rose to popularity in the 1960s, celebrates African-Americans and their celebration of life. Rather than following a specific religion, Kwanzaa celebrates the seven values of African culture. This is called “Nguzo Saba” which means “the seven principles” in Swahili. While the title of traditional foods depends on the specific family, the dinner table still consists of dishes that stay symbolic to Nguzo Saba.

A pasta made from a dry mixture of semolina and water that is rolled into tiny pieces, similar in appearance to rice or grains. A traditional Moroccan style of making couscous is by steaming it in a pot called a couscoussier. Couscous is often the main meal in North African cultures.

A classic southern dish that has many variations and flavors but typically consists of rice, black-eyed peas, smoked pork and onions. This dish is also typically served on New Year’s Day with collard greens and cornbread as symbols of wealth and prosperity.

Although food obviously plays a big role in the culture and celebration of Kwanzaa, every family has their own approach to the way they celebrate the holiday. Whether it be arts and crafts, games or candle lighting, families are open to choose how they celebrate each principle.

American Sign Language teacher Shay Taylor emphasizes that anyone can celebrate Kwanzaa in any way they want. “There are a lot of different ways for people to celebrate Kwanzaa… no way is the wrong way, as long as you are connecting to the principles of the holiday and really making it meaningful for your family because family is a big part of the holiday,” Taylor says.

This holiday is celebrated throughout Mexico and Central America, Las Posadas translates to “The Inns” in Spanish. Las Posadas begins on Dec. 16 and ends on Dec. 24. The celebration honors and emphasizes the journey of Joseph and Mary from Nazareth to Bethlehem.

A traditional soup or stew in Mexican cuisine and made with hominy with meat. It can be seasoned and garnished with shredded lettuce, cabbage, onion, chile peppers, garlic, limes, radishes and much more.

A dessert of fried dough fritter covered in cinnamon and often served with a syrup called piloncillo in Mexican cuisine. These desserts are usually flattened into disks and flavored with anise, and can be filled with sweet or savory fillings. 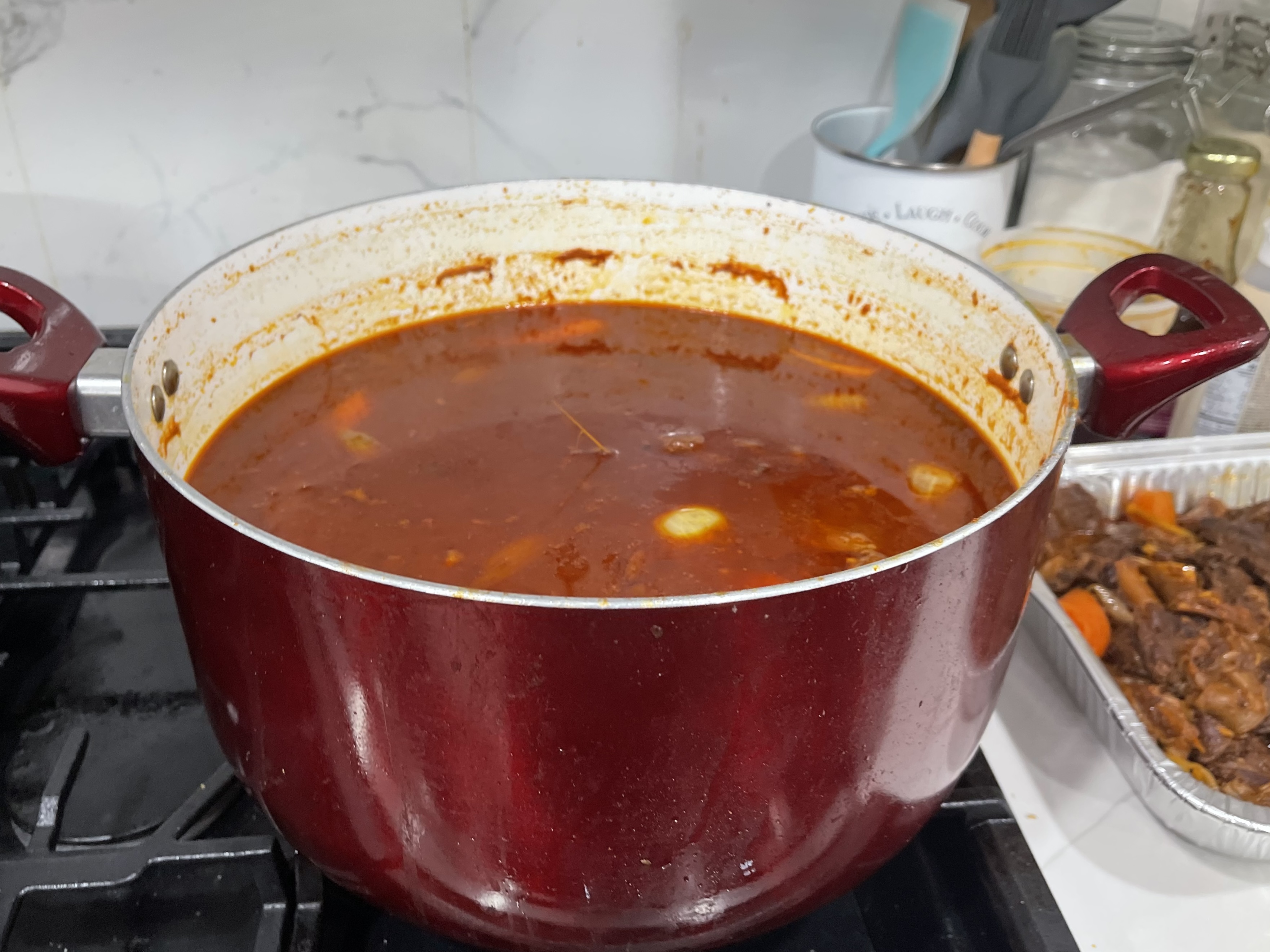 Photo: A soup mixed with spicy broth, steamed vegetables, and chicken prepared at the stove.

A soup mixed with spicy broth, steamed vegetables, and chicken prepared at the stove. Photo courtesy of Katie Phung.

Last but not least, Christmas is a holiday that Americans celebrate across different religions. Foods like turkey, corn, ham and mashed potatoes are typically served, but desserts are more symbolic when it comes to this well-known holiday. Candy canes, gingerbread, and peppermint scream Christmas. But, some desserts really add more flavor when it comes to Christmas cuisine.

A moist molasses cake, typically covered in a rich butter sauce. It is steamed to perfection to create a perfect, chocolatey dessert with texture variety in addition to the cranberry bits.

Buttery, sugar-dusted and jam-filled cookies. Rather than a super sweet cookie, there is a hint of lemon in the dough to add a sparkle of new flavor with the buttery dough and jam.

There is no doubt that these foods are a great way to show off and embrace different cultures around the world. Whether it’s eating together at the dinner table or making these recipes together, the holidays are truly a time for us to come together and celebrate what makes us unique.


Katie Phung. Hi, I'm Katie! (she/her) I'm on the writing and photo staff. I am a huge fan of Kit Connor, if you bring it up to me it will probably be another 30 minutes of just me talking about him. More »