I must have been in seventh grade. I was excitedly texting an old friend while at my aunt’s house on Thanksgiving day. Everyone was ready to feast. The table was covered end to end in differently shaped dishes filled to the brim with steaming hot food. Turkey, mashed potatoes, gravy, macaroni and cheese, paneer masala, fluffy butter naans, spicy chicken, store bought apple pie (to compensate for my family’s lack of skilled bakers), and the center of attraction: a huge pot of biryani, fresh out of the oven.

The dining room smelled wonderful, and I wanted nothing more than to fill a plate (more like several) with as much food as I possibly could. My mouth watered. For food lovers like my family and me, Thanksgiving was and is a big deal. 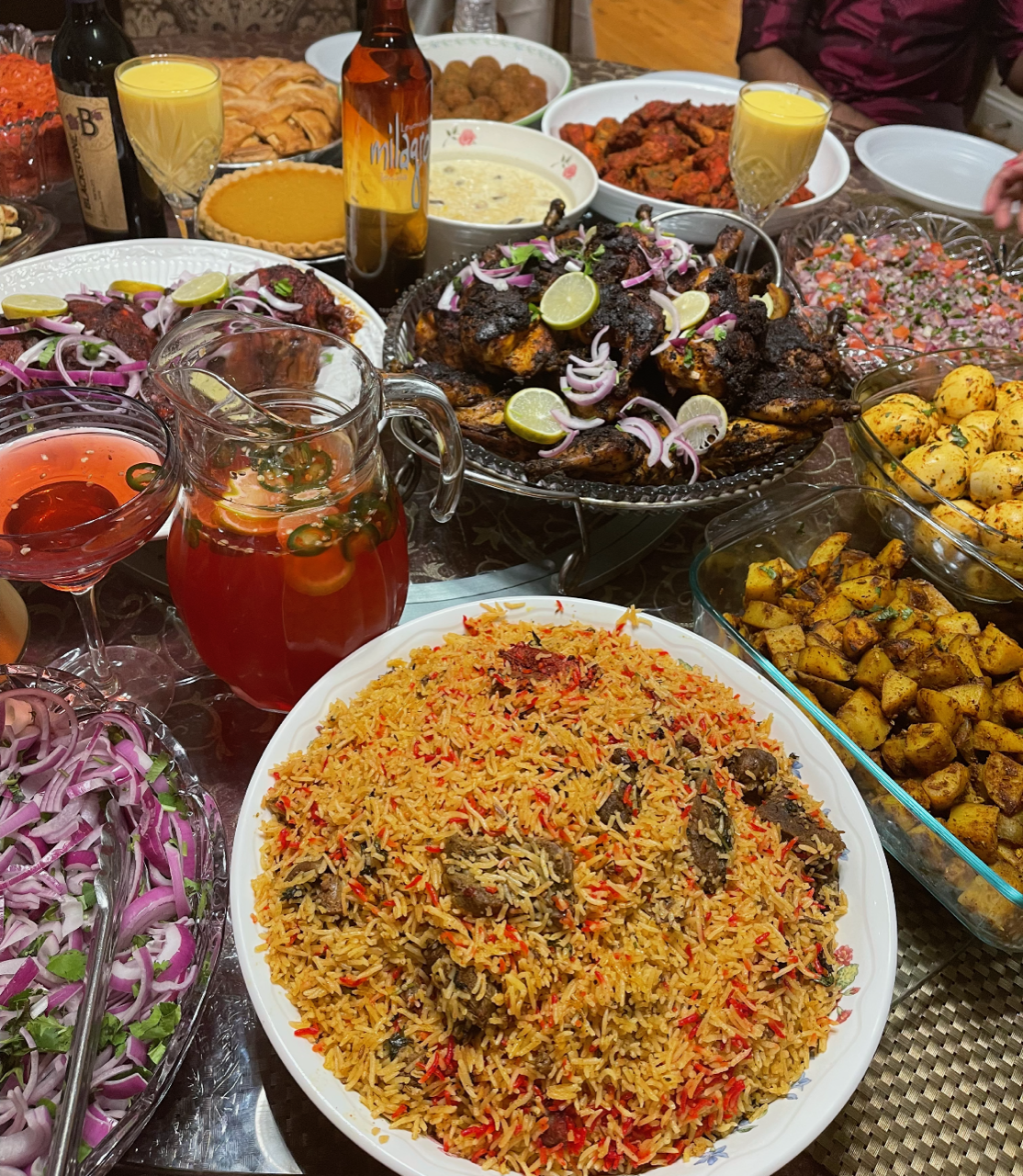 After I proudly texted my friend about the variety of Thanksgiving dishes that lay before me, my friend replied with a snarky, unimpressed text. According to him, my family and I were not “doing Thanksgiving right.” He insisted that turkey, stuffing, and dinner rolls were the way to go, and anything else was almost sacrilegious.

I was, to say the least, annoyed by his response. Sure, Thanksgiving was an “American” holiday, but did that mean eating “traditional American food” (if there was such a thing) was the right way to celebrate? After all, “American” looks a great deal different for a lot of people.

According to data collected by the Pew Research Center, the United States hosts about one-fifth of the world’s migrant population. In 2018, the population of foreign-born Americans reached an all time high of 44.8 million, and that's not even including second-generation immigrants. About 85.7 million people in the United States can trace their roots to countries around the globe. At Blair, almost a third of the students are of Hispanic heritage, and fifteen percent are Asian American.

Putting emphasis on the “Americanness” of this holiday rather than its central theme of gratitude is a terrible mistake. After all, the “American” past of this holiday is not one to be proud of. Though the “first Thanksgiving” is often painted as a rosy picture of pilgrims and Native Americans setting aside their differences to break bread together, this narrative conveniently ignores the events that followed.

After the pilgrims’ arrival, Wamponaoag Indians of present-day southern Massachusetts were forced to watch the exploitation of their land’s plentiful natural resources, the spread of European diseases, and the slaughter of their men. They witnessed the beginnings of the eradication of their people and their culture, which would continue for centuries.

This, however, is not an isolated incident. It is only one item on a laundry list of atrocities this country has tried to ignore, but must come to terms with. Our country has made a habit out of estranging those who aren’t white.

The irony of the United States’ cruel treatment and alienation of Native Americans and Black people is particularly disturbing. Native Americans were here before any Europeans arrived, and were tied to this land by their immense respect for it. Black people were enslaved and forced to work on this land, and continued to make agricultural contributions post-slavery as well. Their bodies are in its soil -- they are quite literally a part of this land, and the foundations upon which our country now stands. And yet, they are still “othered” by their white counterparts.

The ugly truth of America’s treatment of people of color forces us immigrants to ask an important question: If white people have been able to estrange people so closely connected to this land, whose ancestors were born here, and lived here, and died here, what chances do immigrants have of ever calling this place “home”?

Long after our journey to this country has ended, so many of us still feel like travelers. We do not deserve to feel this way. We must believe that we have the right to be here. If those in power have attempted to destroy the culture of minority groups before, why must we let them do it again?

To celebrate Thanksgiving with our own cultures is a redemption for the ones lost, a bold response to those who think we should hide it. We challenge those that tell us, “This is what an American looks like.” Adopting that mindset will create something far more valuable than coming together simply because of tradition: it will encourage us to find unity in our diversity.

Tradition is not inherently valuable. Some of America’s worst attitudes are simply an imitation of the behavior of previous generations. Harmful, false narratives are perpetuated because the current generation fails to evaluate their traditions in the context of the present, and refuses to reflect on how those traditions may hurt themselves and others.

Celebrating Thanksgiving cannot and should not be about remembering the pilgrims. It should be about encouraging gratitude and embracing family. Eating biryani at Thanksgiving always makes me the happiest. I am eating my mother’s food in my family’s house in my birthplace, feeling warm and grateful for all I have. Don’t tell me a slice of turkey is better than that.