Ceremony held to mark the completion of Blair's new field

Lieutenant Governor Anthony Brown presented a $563,000 grant for Blair's new turf field to county officials at a ceremony held on Thursday at noon. The grant, which signified the completion of the new field, was presented to County Executive Isiah Legget at the function held outside of the main office. 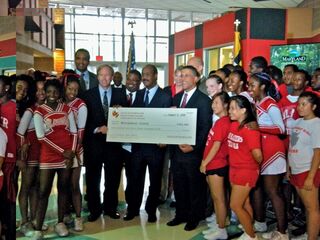 Photo: Lt. Gov. Anthony Brown presented a $563,000 grant for Blair's new turf field to County Executive Isiah Legget, county officials and a member of the school board on Thursday at noon.

Photo: Lt. Gov. Anthony Brown presented a $563,000 grant for Blair's new turf field to County Executive Isiah Legget, county officials and a member of the school board on Thursday at noon.

Several county officials attended the ceremony, as well as many Blair cheerleaders and football players. Chris Barclay, Silver Spring representative on the Board of Education (BOE), began the ceremony by describing how important the new turf is to Blair. "Students at Montgomery Blair High School have a wonderful new sports facility, right in their backyard," he said.

Legget mentioned how Blair sports teams will benefit from the turf in many ways. "This synthetic turf field at Blair Stadium will help increase playing time, reduce field maintenance and provide a durable and consistent playing surface for our student athletes," he said.

The county installed the new turf through a statewide program called Open Space, which invests in facilities such as Blair's field. Blair was selected for the program because students as well as the community use the field. "We have a lot of great open space. Dual use maximizes the use of the program," Brown said.

Construction of the new turf took two months to complete. "There was one month where the bulk of the construction took place," said Jay Childs, of the County Department of Parks. The turf is about one acre, and features new fences and field goals. All of the $563,000 presented at the ceremony was for the construction of the turf. The only maintenance the turf requires is grooming, to keep the infield "grass" at a height of 1/4 - 1/2 inch, according to Childs.

The new field can be used in any playable weather condition, meaning anything but lightning, without jeopardizing athletes' safety. This will result in fewer game delays and less rescheduling, promises Mary Bradford, County Department of Parks Director. Another benefit is that the field never needs to "rest," according to Bradford. The field will be able to withstand day after day of use without being damaged. This reliability means that Blazers are not restricted from using the field in any way, for fire drills or sports.

Childs mentioned that students are also free from turf-related injury. Childs said that because of the nature of the turf, athletes can wear cleats or sneakers while playing. Unlike other turf surfaces where students may develop ankle or foot problems if they wear the wrong shoes, Childs assured that the only difference between grass and this turf is the turf "plays a little faster."

Program Open Space began in the late 1960s and has since preserved more than 350,000 acres of parks and recreational land. Natural Resources Secretary John Griffin spoke about the field at the ceremony. "This project exemplifies the significant benefits of Program Open Space from increasing the aesthetics of our schools and communities to providing much needed recreational facilities for our youth," Griffin said.

Griffin also announced that Walter Johnson will be the next high school to receive a turf field, Blair's turf being second in the county to be installed after Richard Montgomery's.