"A Comedy of Errors," one of Shakespeare's earlier plays, is a farcical tale of mistaken identities that requires utmost excellence in physical comedy. Given this tall order, the Montgomery Blair Players did not fail to entertain their audience throughout the night.

Directed by Kelly O'Connor, the play was preceded by a pre-show that depicted Players in lavish costumes against the backdrop of a magnificent Mediterranean setting. Jugglers, gymnasts, merchants, fiddlers and other fun characters effectively created the atmosphere of Ephesus, a city in Greece. A young girl sold flowers to some audience members while others were pulled onto the stage to interact with the the city's inhabitants. 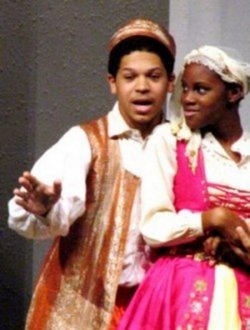 A Comedy of Errors

Photo: Junior Adam Carey and senior Chenelle Morrow as Antipholus of Syracuse and Luciana share a moment in the fall play, A Comedy of Errors. The play continues this weekend Nov. 9th and 10th at 7:30pm.

Photo: Junior Adam Carey and senior Chenelle Morrow as Antipholus of Syracuse and Luciana share a moment in the fall play, A Comedy of Errors. The play continues this weekend Nov. 9th and 10th at 7:30pm.

The play commences with Egeon (Adam Jackson), a citizen of Syracuse, trespassing through Ephesus. Because Egeon lacks funds to pay the fine, the Duke of Ephesus (Brittany Allen) is ready to execute him. Egeon quickly launches into a heart-wrenching story about how his family was separated by a shipwreck - he returned to Syracuse with one twin son and twin slave and his wife went to Ephesus with the other twins. Egeon finds himself in the city after he decides to follow his now-adult son, Antipholus of Syracuse (Adam Carey) and slave Dromio of Syracuse (Maile Zox) on a reuinion mission. Moved by the story, the Duke, decides to give Egeon a day to obtain the money for his fine.

And meanwhile, as Antipholus and Dromio of Syracuse wander the streets of Ephesus in search of their twins, they encounter townspeople who confuse them for their respective brothers Antipholus (Sam Elkind) and Dromio (Maya Baum). As more and more hilarious mishaps ensue, both Antipholuses and Dromios get entangled in a web which seems to become more impossible to unravel.

O'Connor has cast some of Blair's finest actors, who were impressive with their sense of comedic timing and ability to do the great Bard justice. The Dromios, in particular, were perfectly executed by Baum and Zox, as their impeccable portrayal of the blundering and "punny" slaves rendered the audience roaring with laughter throughout the night.

The play was also sprinkled with brilliant small touches like the mischievous fiddler, who would suddenly appear and facetiously play a sad song during heartfelt monologues or Antipholus' cry of "Dromio, Dromio, wherefore art thou, Dromio."

John Kaluta and the Stage Crew created a simple but convincing set of the famous Grecian white-washed buildings that looked great against a background of clear blue skies. The effect was very realistic; it almost appeared that Greece was actually on the stage. The costumes were varied and appropriate - some ornately decorated while others were comparatively plain though all were beautiful and drew enough attention to captivate but not distract from the story.

The genius of Shakespeare's comedies is that they are stories that have been told many times but still manages to entertain with timeless jokes and the "feel good" element. Blair's production of "A Comedy of Errors" goes above and beyond all expectations and provides all audience members with their interpretation.