Champions on and off the field

On August 1, General Mills released a limited-edition Wheaties box featuring the U.S. Women’s National Soccer Team (USWNT). Receiving this honor, which has traditionally been given to world-class athletes since the 1950s, shows that the team is leaving a considerable mark in a country that does not have a large soccer fanbase. They are not only leaving a strong impression in the sports world, but are doing what few athletes have done: impacting the lives of people all across the country and the world.

In early July, the USWNT won the 2019 FIFA Women’s World Cup in France. They beat the Netherlands 2-0 in the final match, claiming their fourth World Cup win. 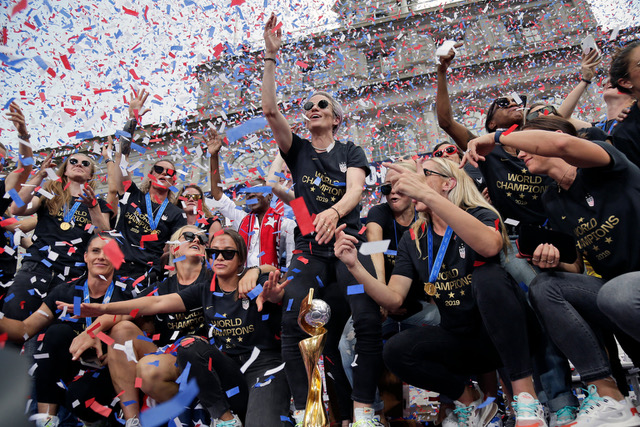 The USWNT pulled off the unimaginable: they brought good soccer to the U.S. They built a huge fanbase in a country where the men’s team didn’t even qualify for the World Cup. Fox News' viewership peaked at nearly 20 million across their coverage of the final match. Following the team's victory, thousands of fans attended the celebratory parade in New York City.

Not only did the USWNT build a loyal audience this World Cup, but they also used their popularity to shed light on important issues such as the pay gap between male and female soccer players. While this has been a popular subject for quite some time, this summer’s World Cup gave the team the perfect opportunity to bring the issue to the forefront.

The team filed a gender discrimination lawsuit against the U.S. Soccer Federation in March. The lawsuit pointed out that the women would be paid 62 percent of the men's earnings in their 20-game schedule outside of the tournament. They also faced large disparities in bonuses earned during the tournament.

The USWNT members are playing smart both on and off the field—well aware of the spotlight placed upon them this summer, they used their stage to talk about this issue and garner support for their fight for equality.

Megan Rapinoe, co-captain of the USWNT, is one of the biggest names from this year’s tournament. She has been the leader of women’s soccer’s movement for equal pay and is becoming a prominent social activist. The Atlantic stated that “Megan Rapinoe is her generation’s Muhammad Ali” because of the way that she has combined sports and activism.

Rapinoe made a splash prior to the World Cup when she announced that she would not participate in singing the national anthem. She later explained that the gesture was in an effort to show her support for those fighting for racial inequality.

Rapinoe made headlines again for harshly refusing the idea of visiting the president. “I’m not going to the f---ing White House if we win,” she said. Rapinoe highlighted her dislike for Trump and his policies, to which the president quickly responded. “Megan should never disrespect our Country, the White House, or our Flag, especially since so much has been done for her & the team,” Trump tweeted.

Rapinoe, along with the rest of her team, have become the face of a movement because of their success as soccer players and their positive use of a platform. Why haven’t other athletes done the same? While many athletes have an audience as large, if not larger, than Rapinoe’s, there are few who use it to their advantage.

Many athletes, with their name-recognition and fanbase, have a greater influence on the general public than politicians, and they need to recognize this. Sports draw far more viewers than any political event. One night of the most recent Democratic Debates on CNN drew 9.2 million viewers whereas the 2019 Super Bowl had 98.2 million viewers and game one of the 2018 World Series averaged nearly 14 million viewers. Tennis player Serena Williams has nearly 11 million Twitter followers to Speaker of the House Nancy Pelosi’s 3 million.

Athletes should be taking advantage of the popularity that they have by using it to make a difference. The USWNT has shown what it means to use their platform to their advantage. They are a prime example of success on and off the field and other athletes should follow their lead.