Renovations on Ellsworth Drive set for completion in 2016

The Downtown Silver Spring Plaza and outdoor area will receive a massive renovation, set to be finished in 2016. In a formal proposal submitted on Jan. 4 to the Montgomery County Planning Department, Peterson companies (Peterson cos.) detailed plans to renovate the main outdoor stairwell; including a new art installation.

Additionally, new ATM machines will be installed in the walkway under the stairwell to replace the current machines located on the side of the staircase and in the middle of heavy foot traffic. The mosaic tile design on the stairs that has fallen into disrepair in recent years will be removed completely. Along the staircase Peterson cos. will install LED lights to adorn new public art from David Carlson, an abstract painter based in Virginia. According to the project proposal, Carlson will be printing his designs onto acrylic panels for the stair rail that should last at least 35 years. 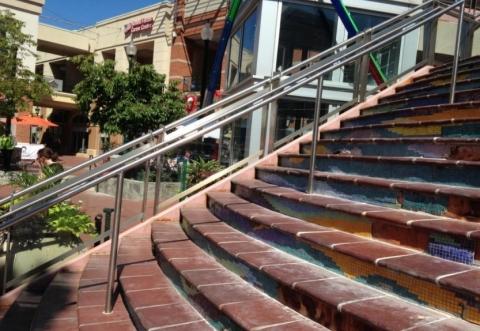 Photo: The current stairwell in Downtown Silver Spring is expected to be completely renovated, and to include a new art installation

Photo: The current stairwell in Downtown Silver Spring is expected to be completely renovated, and to include a new art installation

This renovation proposal comes just after renovationsfor the City Place mall, now to be called Ellsworth Place and scheduled for a 2016 grand opening this spring.

The mall re-design, which is costing around $45 million, will include a $2 million Burlington Coat Factory renovation, and the addition of a Ross department store. In modernizing efforts, the exterior part of the mall and entrance on Fenton and Ellsworth has acquired jumbo Tron screens for advertising.

The Downtown Silver Spring area is a popular spot for many Blazers, some of whom live there, and many of whom frequent the area a lot for social reasons. Junior Addy Hundito, who lives in the downtown Silver Spring area, predicted an increase in foot traffic and general popularity upon completion of the renovations. "It will definitely attract a lot more people now," she said. "People used to come a lot, and then slowly less and less."

Senior Ashlyn Wilson added that the incorporation of new stores and mall structure would boost the attraction as well. "It kind of got dry after a while," she said of the area, prior to proposed renovations. "But now it will be so convenient, which is really nice."