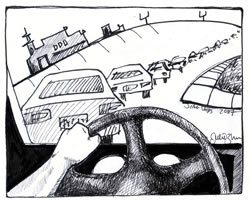 Pain in the Parking Lot

As parents drop off their children, you slowly inch forward until you can finally park. Once you have done so, you notice that approximately ten minutes have gone by since you initially entered the lot. If this sounds like a nightmare, it is not. This is just a typical morning in the Blair student parking lot.

Parents who enter through the University Boulevard side of the parking lot trigger major delays for student drivers and cause Blazers to arrive late to their first block class. Students first have to navigate through a dangerously overcrowded lot, only to find themselves facing detention for arriving to class late.

Security assistant Adrian Kelly stands out in the student parking lot every morning parallel to the crosswalk on University Boulevard. Kelly says that, while the school's busy location is the main reason for delays in the morning, parents are a factor in causing congestion. "Sometimes parents let students permit to school and when the parent has to get out of the car to get back in the drivers seat, that definitely causes a back up," says Kelly.

On Dec. 13, an accident between a senior and a parent driver caused the student to arrive to their first block class late and be locked out of the classroom. The student did not have a late pass and then spent the next 50 minutes in the administration office to obtain a late pass. The parent involved in the accident was stopped in the driving lane to drop his child off. The senior driver was trying to pull around the parent's vehicle to reach her space and in doing so, hit the parent's vehicle.

The administration issuing detentions to students who were late because of an accident or delays caused by parents, especially when the parent driver was not supposed to be there in the first place, is ridiculous.

While it may be convenient for parents to drop off their children in the student parking lot, they end up causing trouble for other students. Senior Andrea Wilkinson says that almost everyday a parent is causing delays. "Parents stop in front of my parking spot to drop their kids off which prevents me from pulling into my spot and also backs up the cars behind me," she says. Wilkinson comments that this is not only annoying, but sometimes causes her to be tardy.

Administration has recognized that the present policy has not been upheld and that there is a problem in the current drop off system. "We will be testing a new strategy because the situation now is just not feasible," business manager James Funk says.

The effectiveness – or even the implementation – of a new strategy remains to be seen. In March 2006, administration also announced plans to devise a new drop off policy after an accident that occurred in the parking lot in February 2006. The plan was never executed.

Security developed a plan to set up cones to create a lane against the median separating the student parking lot from the bus lanes to be used as a student-drop off location. Before the plan could be put into practice, Blair administration had to wait for approval from the MCPS transportation department to ensure that it did not interfere with the buses. Apparently, the plan was never permitted, which would explain while it was never put into action.

But for a small cost, parents simply need to alter their morning schedule. Students should not have to be delayed because of parent intrusion in the student parking lot. Changing their morning routine could be an inconvenience for parents, but so is the traffic that they cause for the students in the University side parking lot.

If parents continue to disregard the school's policy at the expense of student safety and punctuality, then some type of measure must be taken. The administration could start out by sending a letter home with all students informing parents of the policy rules. Any parent who violates the new rule should be fined.

Parents are causing students to arrive late to class and making the parking lot an unsafe place to drive. If the administration is issuing detentions and implementing policies to help students get to class on time, then restricting parents from dropping their children off in the student parking lot is a policy that must be enforced.