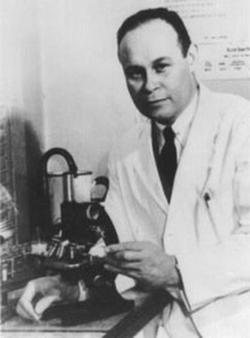 The story of Charles Drew's death is probably one of the best examples of irony. Drew, the man who established the American Red Cross blood bank and who started the first blood drive during World War II, bled to death on April 1, 1950, after crashing his car. Reportedly, Drew was unable to receive a transfusion himself because the hospital he was rushed to did not admit black patients.

Drew was born on June 3, 1904, in Washington, D.C. He was an extremely athletic child and received many rewards in high school and at Amherst College. After graduating from Amherst, Drew spent two years as an athletic director before attending McGill University Medical School. Drew studied blood plasma at Columbia University in New York City and came to the stunning conclusion that blood plasma could be frozen and saved to be used at a later time. This discovery enabled blood banks to collect and store blood to give transfusions to those in need.

During World War II, thousands of soldiers were in desperate need of blood transfusions, so Drew established a blood drive called "Blood for Britain" that transported blood to soldiers on the front lines. During the war, he was also the director of the American Red Cross blood bank. However, he resigned his position in 1942 after officials insisted on separating the blood of whites from the blood of blacks; Drew argued that race made no difference in blood and that separating the blood caused delays in treating soldiers.

After World War II ended, Drew travelled to Howard University to be the Chair of Surgery. He was given the Spingarn Award b the NAACP for his work during the war and spent his time at Howard until his death in 1950. He is still thought of as one of the pioneers in blood work and has a university named after him.

Information has been compiled from The Black Inventor Website, The Great Idea Finder website and the Afro-American Alamanac.