Most teenagers can remember reading "Charlotte's Web," the classic E.B. White novel, with delight and awe in elementary school English classes. Fast-forward ten years and the story loses much of its charm. For this reason, director Gary Winick's screen adaptation may not hold the attention of most Blazers, but the movie is a simplistically well done film for another generation to delight over.

The movie follows Wilbur the pig (voiced by Dominic Scott Kay), a runt who is saved from the axe by Fern (Dakota Fanning). Fern loves Wilbur like a child, but as Wilbur grows bigger he is moved into the Zuckerman farm across the road. There he befriends Charlotte A. Cavatica (voiced by Julia Roberts), a spider who the rest of the barn animals dismiss as creepy and ugly. As the pair's unlikely friendship flourishes, Wilbur finds that come winter, the Zuckermans plan to kill him for Christmas dinner. Charlotte promises Wilbur that he will live to see his first snow and, with the help of Fern, shows the Zuckermans that Wilbur is "some pig" worth saving. 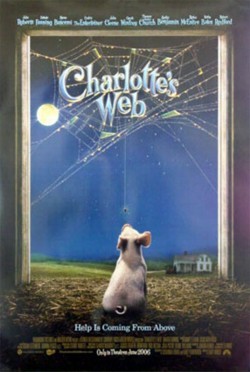 The strongest aspect of the film is the simple elegance with which Winick moves through the plot. Nothing is dragged out or overdone. As the narrator relays parts of the story and the characters show the rest, the movie creates a feel as if the audience was hearing a story from a grandparent.

While the simplicity may not entice young children, the movie's slew of quirky barnyard animals creates constant laughs. Winick brings in flatulent cows, geese with attitude, and a slobbering rat among others. Many of the animals go beyond farting for laughs, such as Gussy (Oprah Winfrey) and Golly (Cedric the Entertainer), the quarreling geese couple that cracks jokes reminiscent of human marriages. While the movie is not intended to be a comedy, Winick's interjection of humor into the supporting animals makes the movie more engaging.

Much of the barnyard animals' charm comes from the talented array of actors Winick enlists to voice them. Winfrey shines as Gussy, bringing attitude to the "mother goose." In less notable performances, the movie features the voices of Robert Redford, Andre 'Andre 3000' Benjamin of Outkast and Cedric the Entertainer.

In her major role as Charlotte, Roberts oftentimes falls flat with a monotone voice and cheesy dialogue, but still turns in a decent performance. On the other hand, Kay, a ten-year-old child, excels as Wilbur by bringing the candor and honesty of a child's voice to his character.

As the only famous actress the audience sees, Fanning is decent but does not seem to have been able to lose the fear that was permanently drilled into her eyes in "War of the Worlds." Still, her role is minor and consists mostly of cuddling with Wilbur.

"Charlotte's Web" will delight some and bore others. But for those who it delights, the movie simplistically portrays the tale of an unlikely friendship and shows that nothing, not even a runty pig, is ordinary.